Chabad at UCF remembers, gives back on Sept. 11 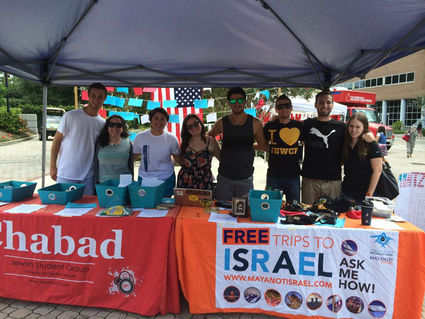 Chabad at UCF booth for the 9/11 Mitzvah Marathon.

People all around the country each have their own unique memory of how they felt when thousands of people lost their lives in the acts of terrorism conducted on Sept. 11, 2001. A select few, however, have a strong personal connection with this day because they knew someone who was involved in the tragedy.

"My dad was in the tower that day, and I remember it very clearly," said Jared Koreff, a PhD student at the University of Central Florida. "I was in eighth grade, and just the fear of sitting in class and not knowing how things were going to turn out when I got home."

Koreff's father was lucky enough to escape the tower before it collapsed, making this day a blessing for him and his family. 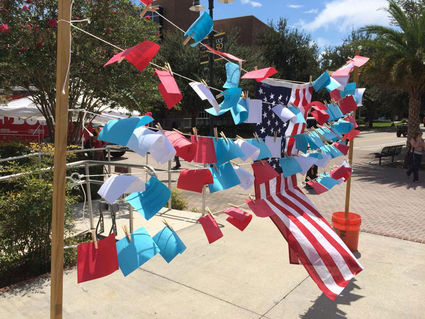 Participants in the Mitzvah Marathon wrote their good deed on red, white or blue paper (colors of the American flag) and pinned them to a clothesline.

Thirteen years later, Chabad at UCF along with the Sorority Alpha Epsilon Phi and Fraternities Alpha Epsilon Pi and Zeta Beta Tau gave Koreff, and other students the opportunity to commemorate and give back with their special event, "9/11 Mitzvah Marathon." The event was in memory of Suzann and Marrisa Cayne's dad who lost his life on that fateful day.

Rivkie Lipskier, the co-director of Chabad, and other volunteers sat at a table outside of the student union for four hours with a variety of good deeds set up for students to perform. These included donating a canned food item, writing a note to an American soldier, saying a prayer, calling their grandparents, giving to charity, putting on tefillin, putting up a mezuzah and lighting Shabbat candles.

"A mitzvah is a good deed," Lipskier said. "We felt the best way to perpetuate the memories of those almost 2,000 victims of terror is through mitzvahs."

At the end of the day, hundreds of people had taken part in the event, portraying just how much this day means to people around the UCF area, and to all of America.

To learn more about Chabad at UCF please visit http://www.jewishucf.com.