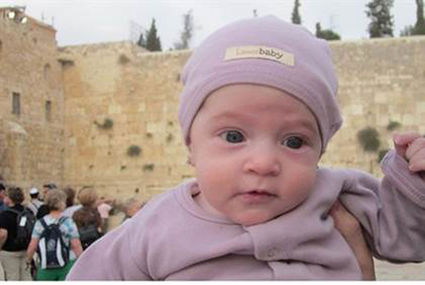 This photo was taken at the Kotel just hours before 3-month-old Chaya Zisel Braun was murdered in a terrorist attack at Ammunition Hill light rail station in Jerusalem.

JERUSALEM-As the afternoon sun showers Jerusalem with gold, Ammunition Hill looks like any of the city's other 22 light rail stops. Since 2011, untold numbers of Israelis-Jews, Muslims, and Christians alike-have been catching the train every nine minutes or so along the 8.6-mile route through Jerusalem's main shopping streets and many residential neighborhoods.

In fact, for the commuters, college students, and shoppers getting off and on here, there is little to indicate that a terrorist attack just recently took place on this very platform.

Even on Oct. 23, the day after the attack, normalcy had already returned. Or so it seemed. The wreckage of attacker Abdel Rahman Al-Shaludi's car had been cleared, and all signs of the violence had been cleaned up. In fact, the only indication that Israeli blood had been spilled here was a group of young Israelis waving the nation's flag and singing "Am Yisrael Chai" (the people of Israel live) at the top of their lungs.

But now that, in addition to 3-month-old Chaya Zissel Braun, a second victim-Karen Yemima Mosquera, an Ecuadorian candidate for conversion to Judaism-has died of her wounds, and as a half dozen others slowly heal from their injuries, officials are struggling to deal with the escalating violence in the nation's capital.

All the while, Israeli citizens are trying to make sense of it all.

"It's scary," said 19-year-old David Alcalay while glancing down the Ammunition Hill platform. "It brings back the feelings of when I was 8 and the second intifada was on. I would come home from school every afternoon and ask my mom, 'How many people were killed today?'"

Ammunition Hill, however, seems to historically always be in harm's way. It got its name during the 1930s as a storehouse for British ammunition and was the scene of major battles between Jordan and Israel during both the War for Independence and the Six Day War, due to its strategic location as gateway to the Mt. Scopus area and ultimately the Old City. These days it is perched on the border of Jewish and Arab neighborhoods now connected by the light rail, which means that residents of the Israeli neighborhood Pisgat Ze'ev, for instance, need to travel through Arab neighborhoods to get home at night. Increasingly, these areas of town are the scenes of frequent rock throwing. "Standing here, I saw a train go by with a cracked window and I know it didn't happen from natural causes," Alcalay said. "Sadly, it's a sign of the times."

Yet as his bus passed the Ammunition Hill train stop, Yosef Cohen was quick to point out that such violence is not restricted to a certain neighborhood. "I've lived in this city for 30 years and I know it can happen anywhere," he said. "But I still feel safe here. Their leaders are whipping them up because they want to make us afraid, but we can't let them scare us."

In the face of escalating violence, Prime Minister Benjamin Netanyahu has pledged to step up security, alerting his cabinet to the 1,000 additional border guards assigned to beef up defense of the city.

"United Jerusalem was, and will always remain, the capital of Jerusalem," Netanyahu said. "Every attempt to harm its people will be met with a stronger response. We will return peace and security to Jerusalem."

Which is exactly what Orlee Canaan, sitting on a bench on the Ammunition Hill platform, wants to hear. "I'm not afraid to be here but I do know that, if we put up with them throwing rocks at trains and cars it will just escalate," said the Afula native and mother of five (one of whom is in the Israel Defense Forces). "We have to be strong and we have to be clear. Otherwise the enemy will see us as weak and become bolder and more and more violent."

In fact, since the Ammunition Hill attack, Hamas's news agency has been running a poster encouraging other Palestinians to mimic Al-Shaludiuse by using their cars as weapons against Israelis.

"Look around and it doesn't seem like we are at war, but we are at war," she said, describing that the recent wave of attacks is "bound to make us feel more vulnerable and more aware that we are standing at an invisible border between us and the enemy."

And Avinir, who has a Ph.D. in conflict resolution, argues that the Israeli-Palestinian conflict shows no sign of abating.

"Until children are raised without hate it is difficult to resolve this kind of long-term conflict," she said. "Not while parents continue to teach and model violence instead of peace."