Celebrating the fall of the Berlin Wall 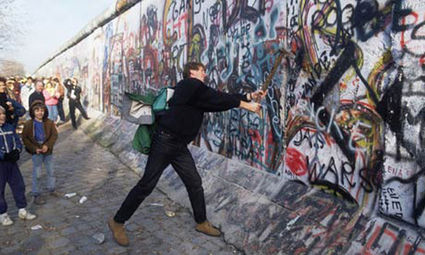 This year marks the 25th anniversary of the fall of the Berlin Wall-a wall built right through the heart of Germany and its capital city, Berlin. This wall tore families apart, caused job loss to many, and cost the lives of more than 200 people who tried to cross over it.

Before the Wall was constructed by the German Democratic Republic (GDR, East Germany) on Aug. 13, 1961, more than 3.5 million East Germans defected to West Germany. At first the GDR stated that there were no intentions to build a wall separating East and West Berlin. However, on Saturday, Aug. 12, 1961, in a wooded area north of East Berlin, GDR party leader Walter Ulbricht signed orders to close the border and erect a wall, giving birth to the Berlin Wall. At midnight that evening, the East German army and police began to close the border and tear up the streets running alongside the border. At first the wall was a barbed-wire fence. The concrete wall was erected between 1965 and 1975.

The East German government claimed the wall kept West German aggression out-the wall protected East Germans. The belief of the people was that the wall kept East Germans from escaping to West Germany. This belief was confirmed when shortly after the wall was erected two people died while attempting to escape-Ida Sickmann died after she jumped out a third-floor window. Two days later, Gunter Litfin, 24, tried to swim across the Spree Canal and was shot by East German police, who had received shoot-to-kill orders to prevent anyone from leaving East Berlin.

Twenty-eight years later, the Berlin Wall came tumbling down. On Nov. 9, 1989, 51 years to the day after Kristallnacht, Germany was reunified. More than 170,000 Jews from the former Soviet Union immigrated to Germany, and German Jewish life began to re-emerge. 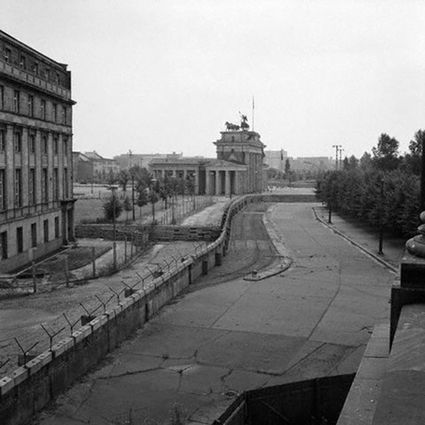 The Berlin Wall looking from the West Berlin side.

When it was announced that the Wall would come down, it seemed the world rejoiced. Celebrations were held with many well-known musicians: On Nov. 21, 1989, Crosby, Stills & Nash performed the song "Chippin' Away" in front of the Brandenburg Gate. On Dec. 25, 1989, Leonard Bernstein performed in Berlin-the concert included Beethoven's "Ode to Joy," with the word "Joy" changed to "Freedom." And the following July, Roger Waters of Pink Floyd performed "The Wall" album near Potsdamer Platz, with a host of fellow musicians, including Bon Jovi, Sinead O'Connor, Cyndi Lauper, Joni Mitchell, Marianne Faithful and Van Morrison to name a few.

Today Berlin is the home to more than 11,000 Jews. Jewish sites such as the Neue Synagogue, which was consecrated in 1866 and one of the few synagogues to survive Kristallnacht, and the Rykestrasse Synagogue, the largest synagogue in Germany built in 1904, have been reconstructed, and Jewish culture is once again vibrant in this country that once tried to exterminate all the Jews.