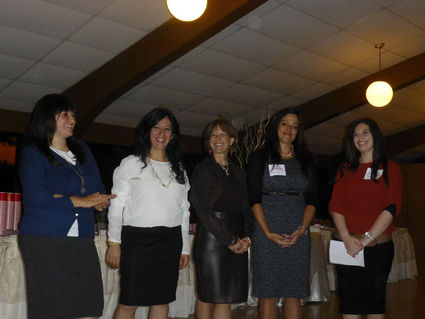 The Mega Challah Bake has re-introduced the joy of challah-making to woman around the globe in recent months. On Thursday, Oct. 23, Orlando's five Chabad Centers brought the Mega Challah Bake to Central Florida, with more than 200 Jewish women of all affiliations joining in the mix. The Challah Bake was led by all five women of Chabad, who each brought something unique to the table, which they shared at the gathering held at the Maitland Civic Center.

Chanshy Majesky, co-director of Chabad of North Orlando, noted that the diverse group of women had many reasons for attending. Challah Bake participant, Sara Danziger, called the evening "a gathering with a purpose." The active grandmother shared that she attended the event because she was open to learning something new about the challah-making process after making challah for years. Attendee Andrea Kornbleau referred to herself as "Orlando's newest resident," and shared that she came to the Challah Bake to "meet women who find this experience as meaningful as I do, to network, and to make new friends."

Majesky pointed out that everyone present had a common interest. "Tonight women are coming together as sisters to celebrate their Judaism," she said. Majesky shared that Challah Bakes were taking place all over the country, and were unifying Jewish women of all backgrounds. She compared the women in the room to the six strands of dough (coming from different directions) that are braided together to form "a beautiful and unified challah," much like the women in the room who were tied together by their shared history. She added, "It's a beautiful show of unity for all sections of the Jewish community to come together, drawing women from all affiliations."

Devorah Leah Dubov, co-director of Chabad of Greater Orlando explained the mitzvah of separating the dough. Dubov shared that this separation goes back to "rashit" or creation. "This is where the mitzvah comes in. In a special moment of introspection we women, separate a portion of dough and make a blessing. The lesson we learn is that all hard work and effort (becomes) a recognition of G-d. We can find G-d in every single thing we do, no matter how busy we are. G-d is in everything," Dubov said.

Chani Konikov, co-director of Chabad of South Orlando, asked the rhetorical question, "Why do we have two challahs (on Shabbat) and not just one?" She answered, "In the desert G-d provided everything for us, and on Fridays G-d provided two portions of manna." Konikov noted that to this day it is traditional to make two challahs to represent the second portion of manna. She added that we cover the challah (beneath with a board, on top with a cover) to commemorate the dew that covered the challah from above and below.

Rivky Lipskier, co-director of Chabad at UCF shared the three special mitzvot performed by women, which include the baking of the challah, the lighting of the Shabbat candles, and attending the mikvah. She remarked that these mitzvot can be traced all the way back to the matriarchs, and that (thousands of years ago) Sarah's challah was said to have a healing quality. She noted, "The making of challah links us in a chain for thousands of years." 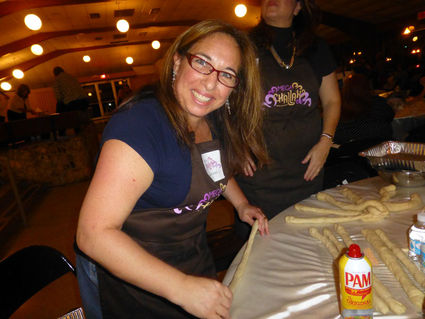 Expert baker Sharon Fraifeld shows how easy it is to roll out challah strands.

From there, the Mega Challah Bake began. The participants, who had premeasured ingredients neatly packaged on their plates, were directed by Lipskier to rip open the package of yeast on their plates, and to add water and followed by a pinch of sugar. As the dry and wet ingredients were mixed with one another, the challahs came together quickly. The feeling of sisterhood was palpable, as the women adorned in matching aprons, kneaded, rolled, and separated the dough in synchrony. Participants lent one another a hand when needed and gave guidance when asked. Experienced baker Sharon Fraifeld rolled out perfectly rounded strands of challah and demonstrated her rolling technique to her tablemates, who soon formed six perfect strands of their own.

After the women enjoyed an evening of soup and salad, it was time to braid the challahs. Some challenges occurred when it came time to weave together the six separate strands, as most women had braided with only three. Noting the confusion, the ladies of Chabad jumped in and guided entire tables through the maze of directions. As the evening came to an end, 200 women left with beautifully shaped loaves of bread, tying the participants to women around the world through this shared experience.