Lions, Pacesetters kick off 2015 Annual Campaign with a record fundraiser 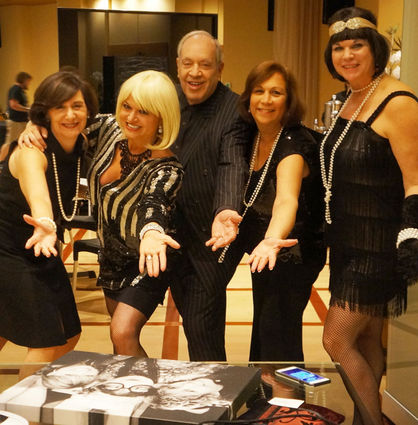 The Jewish Federation kicked of its 2015 Shaping the Future Annual Campaign with a combined Hy Lake Pacesetters dinner and Women's Division Lion of Judah event on Sunday, Oct. 26. The event honored Harriett Lake and presented her with the Kipnis-Wilson/Friendland Award that Lake received earlier this year at the International Lion of Judah Conference. The festive '20s-style celebration was graciously hosted by Alan and Kelly Ginsburg at their home in Winter Park.

The event set a winning pace for the Federation's Annual Campaign raising a record $313,000. In her remarks, Rhonda Forest, the chairwoman of the board, shared her vision of the Jewish Federation for the next several years. Some of the key areas of focus will be cultivating the next generation of leaders to shape the future of the Jewish community; creating new opportunities for our Jewish Community Relations Committee to engage in community affairs at the local, state and national levels, expanding Shalom Orlando to welcome and attract newcomers, and developing an Israel Resource Center to coordinate missions to Israel. Forest added that Federation's main priority is fostering a robust fundraising program that would generate resources to support programs and services of partner agencies and synagogues. She also informed the group about the upcoming capital campaign to reduce the debt on the Maitland campus.

Following her remarks, Forest introduced guest speaker Linda Hurwitz, national campaign chair of the Jewish Federations of North America who has traveled across the United visiting 93 of the 156 Federation communities to bring her message of caring and responsibility. She shared her reasons for involvement and giving and encouraged everybody to reach into their hearts and commit to the future of the Jewish people. Hurwitz's passion and enthusiasm inspired many people in the audience to make increased gifts to the 2015 annual campaign.

Rene Brent, this year's chair of the women's Lion of Judah campaign, spoke about the power of women's philanthropy to change the world. Moved by her experience at the recent International Lion of Judah Conference, Brent has joined the ranks of the Lions who have created a Lion of Judah Endowment to perpetuate their commitment to the Jewish community.

As a tribute to Harriett Lake, who introduced the Lion of Judah to Orlando 30 years ago, the event featured a fashion runway show that narrated Harriett's life and philanthropic achievements. In honor of this special anniversary, Lake has become the first Platinum Lion of Judah in the Orlando Jewish community with an outstanding leadership gift of $100,000 to the 2015 annual campaign.

The evening ended on a note of excitement and enthusiasm as Federation continues to raise the funds to shape the future of this Jewish community. The mission of the Jewish Federation of Greater Orlando is to nurture a unified Jewish community that transcends generations and neighborhoods. For more information and to be counted in the 2015 Shaping the Future Annual Campaign please contact Emely Katz at 407-645-5933 or at ekatz@jfgo.org or make a generous contribution on our secure web site http://www.jfgo.org.