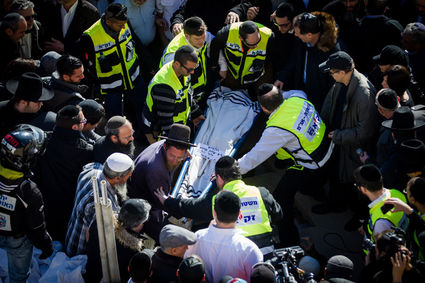 Mourners seen carrying one of the bodies for burial during the funeral ceremony at Jerusalem's Har HaMenuchot cemetery for the four Jewish victims in Paris' Hyper Cacher terror attack, Jan. 13, 2015.

The four bodies were wrapped in Jewish prayer shawls and laid out on stretchers. All of them should have lived for many years before they were buried. The victims of the synagogue attack were all killed in the kosher supermarket in France, and their bodies brought to Jerusalem for burial.

Relatives of each of the dead lit a torch and said a few words. One of the victims, Francois-Michel Saada, a businessman, had already bought an apartment in Israel and was preparing to move here.

"Francois-Michel was someone really generous that all his life he put his wife, his children, his friends before himself," his son Yonatan told the crowd. "He was in love with Israel. He really wanted to live here. He's here now."

Said, "Phillipe, my beloved, was a perfect man. A man who thinks of others before himself, a great husband and father who lived for his children," said Valerie, Phillipe Braham's widow. "I'm crying, but I know that you're all crying with me and I thank you all for that. Phillipe, protect me, Naor and Elad," she said, referring to her young children.

Rabbi Benjamin Hattab, the rabbi of the Jewish community on the island of Djerba, could barely speak about his son Yoav, 21.

"I accept the judgment of heaven with love," he said, his voice breaking.

Yoav had been in Israel just weeks ago on a Birthright trip, and a photo of him wrapped in an Israeli flag at the Western Wall was prominently published in Israeli media.

It is not the Hattab family's first experience with terrorism. His aunt, who he never met, was killed when she was 14 years old during an attack on a synagogue in Djerba in 1985, when a policeman opened fire during prayers at the synagogue, killing three people.

Hattab was also mourned by many of his Muslim friends in Tunisia, who opened a Facebook page in his memory with eulogies and prayers in Arabic. Several of his friends wrote that he should have been buried in Tunisia, not in Israel. They also lamented the fact that they were unable to come to the funeral as Tunisia and Israel have no diplomatic relations.

"Tunisia is the land of our ancestors," one of his friends wrote. "We could have gone to the funeral and paid our respects. Instead it will be strangers in Israel who gather around his grave, may his soul be blessed."

Some of the thousands of mourners knew the victims personally but many others did not. Simcha Singer came to show support for his friend and colleague, Yonatan Saada, whose father was killed.

"My body went into shock and I was trembling and goose bumps all over my body thinking how close to home it hit this time around," Singer told The Media Line.

Others said they came to show support for their compatriots in France.

"We all feel that it can happen to you, your son, or your brother," Annie Perez, who has two children living in Israel, told The Media Line. "There is something that touches us very personally and that's why we are here. In our tradition it is very important to come and to give our support to the family who are in a difficult situation."

"We cannot allow it to be the case, that in the year 2015, seventy years since the end of the Second World War, Jews are afraid to walk in the streets of Europe with skullcaps and tzitit (ritual fringes)," he said. "It is no longer possible to remain ambiguous, or to act with leniency against the rabid anti-Semitic incitement. Ignorance and violence will not go away on its own."

Many of those at the funeral called on their French brethren to follow them to Israel.

"It is just going to get worse for Jews all over the world now," Michael Ben Soussan, who moved to Israel in August, told The Media Line. "I have a message for French Jews-they should all learn Hebrew and get ready to come here because they don't know when they will have to leave."