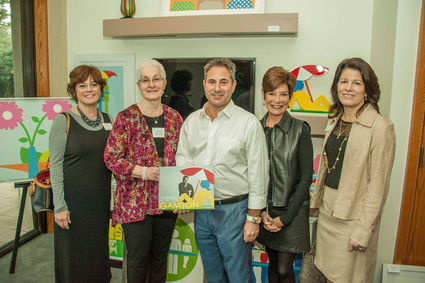 On Jan. 15, the "Pearls" of the Jewish Pavilion (POP) enjoyed a state-of-the-art event featuring a gourmet luncheon, along with an eye-popping tour of the art-filled residence of Bob and Elaine Gamson. Forty POPs toured the contemporary Longwood home located in the Springs, and learned about the multi-media conceptual pop art created by their son, Stephen, who shared the influences behind his unique works of bold and iconic art representative of the communication age. He also touched upon the contemporary 20th century masterpieces collected by his parents.

One participant noted, "The Gamson home has the feel of an actual museum of modern art. Every time I visit and see works by Andy Warhol, Keith Haring, Roy Lichtenstein, and their son, Stephen, I feel like I should be paying admission."

Before sitting down to lunch, Elaine Gamson addressed the POP (donors who have contributed more than $500 to the Jewish Pavilion) and welcomed them to her home.

"Thanks to Sheryl Meitin and Claire Chepenik who started the Pavilion. And thanks to Nancy Ludin who is the backbone that holds it together. Thanks to all of you for your contributions. With your support, I believe the Pavilion has become one of the strongest organizations in the city," said Gamson.

She introduced son, Stephen, who was raised in Maitland and now lives in Miami, and shared a few insights about his work that only a parent might know.

"I knew Stephen was going to be an artist from the time he was two years old. He insisted on wearing two unmatching shoes, and already had a defined sense of style. While most kids were out collecting baseball cards, he was out collecting art."

Elaine credits Stephen for the gallery-like effect that resonates throughout the home. She smiled, "I have always looked to Stephen for matters about art, as if I have a choice. He fell in love with this house (inspired by renowned architect Frank Lloyd Wright), which we bought almost 15 years ago. He picked it because it has great walls."

"This house is a great place to showcase art, and I was able to convince my parents to collect each piece," Stephen added.

He also noted that his parent's considerable collection consists of many kinds of contemporary art that influenced his own vibrant and colorful style, including graffiti, Outsider, Pop and sculptural. The collection features works by Keith Haring, Thornton Dial, Andy Warhol, Dale Chihuly, and Roy Lichtenstein.

Gamson began studying and collecting art on a shoestring budget as a teen at Winter Park High School. He began his career in art as rep for a well-known artist. After a time, he realized that working for someone else was holding back his own artistic ventures. "I needed to stop working vicariously, and go in full force, or regret it. (Going out on my own) was a courageous move, as most people in this industry fail," he shared.

Gamson waited to break out on his own until he had an idea that he considered to be commercially viable. He found the inspiration behind his sunny and emblematic style during his extensive travels. On a trip to Russia, he noted that international airports seemed to have a visual language (in the form of signage) that transcended spoken language that was universally understood.

"Iconic pictures allow the traveler to immediately grasp information, whether or not they speak the language."

Gamson used the "@" symbol as an example of a universally accepted icon which "just about everyone on the planet can recognize."

The unspoken language of Gamson's optimistic and symbolic artworks was a breakout success and appealed to collectors, art enthusiasts, celebrities, museums, and companies. His art has been featured at Art Basel Miami Beach, the Scope Art Fair, the Red Dot Art Show, Art Miami, and in many solo and group exhibitions internationally, where he is collected by "A" list celebrities and corporations.

Gamson also shared a few details about his experiences in Monaco, when he was honored as Official Artist for the Monaco Grand Prix. He stated, "I had a king on my left and Prince Albert was seated at my right. I had tears in my eyes and was truly humbled by this surreal experience ... my works hang in the palace in Monaco."

His artwork has opened up some wonderful and unexpected opportunities, like when Richard Branson flew him to the British Virgin Islands as the Official Artist for the Necker Cup.

Gamson clarified that not all of his collectors are celebrities or the rich and famous. "Anyone who collects my art is a celebrity in my mind and I am truly humbled by their appreciation. Just anyone can afford my art, which comes in at all different prices."

Gamson concluded the event by thanking the Jewish Pavilion for all that they had done for his grandmother, the late Rebecca Gaeser, and for all her friends in elder-care facilities. Following the luncheon, a small selection of his artwork was made available for sale at reduced prices from his Miami Gallery. Gamson generously donated a portion of sales to the Jewish Pavilion.

Jewish Pavilion Board President Elise Schilowitz noted, "We are so grateful to Elaine and Bob Gamson for opening up their home for our Pearl Luncheon, and to Stephen for sharing pearls of wisdom about modern and Pop art. Also, big thank you to the POP who help the Jewish Pavilion make an art out of enhancing the lives of elders in long-term care in more than 50 facilities in Greater Orlando."