Tu B'Shevat springs up at Brookdale and the Jewish Pavilion 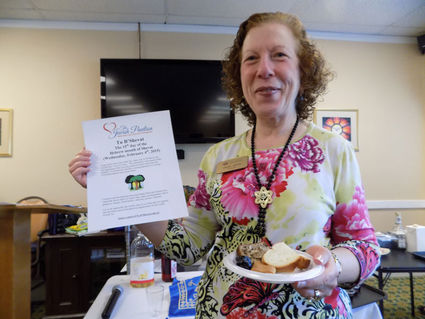 On Friday, Jan. 31 a Tu B'Shevat seder sprung up at Brookdale Island Lake in Longwood with the help of the Jewish Pavilion. Longtime volunteer and president of the Jewish National Fund Board, Debbie Meitin, led the 30-minute service and celebration. Meitin noted that Tu B'Shevat is the New Year for trees, and coincides with springtime in the land of Israel. Emily Newman, Jewish Pavilion senior specialist and program director, pointed out that a Tu B'Shevat seder is somewhat similar to a Passover seder, as it involves four questions and the drinking of four cups of wine. However, unlike Passover seders, all food and drink associated with the Tu B'Shevat seder comes from the earth, and involves fruits stemming from the land of Israel.

Meitin remarked that while Tu B'Shevat seders go back thousands of years, they have only become fashionable in American synagogues for the past 10-15 years. She noted, "Tu B'Shevat seders are something positive for us to celebrate." Meitin continued, "While some of you may have experienced a Tu B'Shevat celebration in the past, today will be the first Tu B'Shevat seder for many seniors in the crowd."

Myrna Ossin made the Tu B'Shevat seder a family affair, and enjoyed the service alongside her mother, Lorraine Shulman. Ossin had attended Tu B'Shevat celebrations in years past. She shared, "During the seder there are times when we say the prayer over the fruit of the tree, and other times we say the prayer for the fruit of the vine." Mostly, Ossin noted that she was happy to be celebrating with her mother, who turned 98 years old on Feb. 6.

Brookdale resident Penny Linder and Buddy Bach, grew up Tu B'Shevat seders in their hometowns in the Northeast. Bach stated, "Attending today's seder brings back everything I shared with my family. My parents would be thrilled that I am here celebrating today." Linder added, "Like Buddy, I honor my parents by attending programs like this one. The Pavilion cements Brookdale as my home, and makes it a place I can share Tu B'Shevat and other occasions with friends and family."

Friday's celebration was the first Tu B'Shevat seder for residents Ann Finkelstein and Corrine Gumson. Both women closely followed the steps of the seder, drinking the cups of red and white wine, and sampling the fruits of the tree and the vine. Gumson noted that she took joy in celebrating the holiday with fellow Jews around the world. Finkelstein shared that the service was "very interesting, and served as a reminder of the fruits of the tree and the land of Israel." 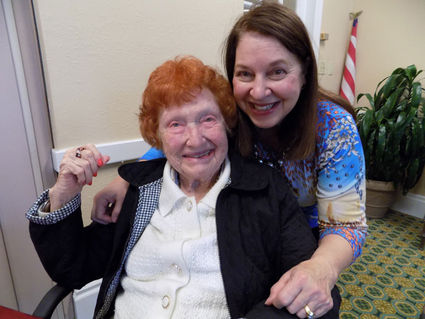