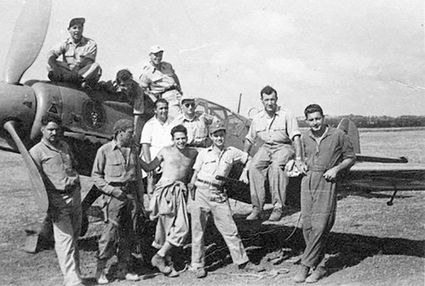 Pictured are American pilots who volunteered for Israel during the 1948 War of Independence. The pilots' story is documented is Nancy Spielberg's new film, 'Above and Beyond.'

Not as famous as director Steven Spielberg is his sister Nancy, the filmmaker. Lesser known than the Israelis who fought for their country's independence were the American pilots who secretly joined that fight. Ahead of Israel's 67th Independence Day, the new documentary "Above and Beyond" is fusing those two unsung elements.

AIPAC is bringing this film to Orlando on May 11, 7 p.m. at the Orlando Science Center.

In 1948, just three years after the liberation of Nazi death camps, a group of American Jewish pilots answered a call for help. In secret and at great personal risk, they smuggled planes out of the U.S., trained behind the Iron Curtain in Czechoslovakia, and flew for Israel in its War of Independence.

As members of the Machal-"volunteers from abroad"-this ragtag band of brothers not only turned the tide of the war, but also embarked on personal journeys of discovery and renewed Jewish pride. Winning audience awards from Florida to West Virginia, "Above and Beyond" presents their story.

A businesswoman, fundraiser, and philanthropist, Nancy Spielberg has in recent years turned her energy and talents to producing documentary films. She served as consultant on the Oscar-winning documentary "Chernobyl Heart" and is executive producer of "Elusive Justice: The Search for Nazi War Criminals," which aired nationally on PBS. She also produced a film project for the Israeli government, "Celebrities Salute Israel's 60th," which was featured in New York City's Times Square on the NASDAQ stock exchange screens for one month.

Spielberg says she first became attracted to the American Jewish pilots' story after reading an obituary of Al Schwimmer, who is regarded by many as the father of the Israeli Air Force. Schwimmer worked for the now-defunct TWA airline and was a flight engineer for the U.S. Air Transport Command in World War II. Upon learning of the need for aircraft for the new nation of Israel, he smuggled 30 surplus planes to the Jewish state in 1948. He also recruited pilots and crew members from the U.S.

After the war, Schwimmer was indicted for violating the U.S. Neutrality Act and lost his citizenship. He stayed in Israel and founded Israel Aerospace Industries. In 2001, he was pardoned by U.S. president Bill Clinton.

Nancy Spielberg calls Schwimmer the key figure in the story of "Above and Beyond."

"He was the man that everybody respected," she tells JNS.org. "People ran to help him. He was a quiet, soft-spoken guy, but when he walked in a room he had an air about him where everyone listened. He was a natural-born leader in many ways. He called upon his contacts at TWA and Pan Am (Pan American World Airways) and got the ball rolling."

After deciding to produce the documentary, Spielberg contacted award-winning filmmaker Roberta Grossman to be the director. Grossman has written and produced more than 40 hours of documentary film and television, including "Hava Nagila," "Blessed Is the Match: The Life and Death of Hannah Senesh" (which was shortlisted for an Academy Award and won the audience award at 13 film festivals), and "500 Nations," the eight-hour CBS miniseries on Native Americans hosted by Kevin Costner. She is currently beginning production on a new film, "Who Will Write Our History," about the secret archives of the Warsaw Ghetto.

The pilots featured in "Above and Beyond" are Leon Frankel, Coleman Goldstein, Lou Lenart, George Lichter, Gideon Lichtman, Harold Livingston, Milton Rubenfeld, Smoky Simon, Stan Andrews, and Bob Vickman. Art students at University of California, Los Angeles in 1948, Andrews and Vickman had been stationed in the Pacific with the U.S. Air Force in World War II. They arrived in Israel in June 1948. In a Tel Aviv bar, they created the logo for the 101 Squadron unit of the Israeli Air Force, scribbling the Angel of Death on a cocktail napkin. Their design is still on Israeli F-16 jets today. Both men were killed when their planes were shot down in separate incidents in July and October 1948.

With the exception of Lenart, whose family members were recent immigrants to the U.S. at the time, the pilots were all second-generation Americans. They were part of the group American Jews who had come from Eastern Europe and other places in the first quarter of the 20th century.

"They were very Americanized and patriotic," Grossman tells JNS.org. "The thrust of that time had been for assimilation. People were still changing their names and distancing themselves from their grandparents. The grandparents' generation spoke Yiddish, the parents' generation spoke some, and then they didn't teach it to their children. By the time we get to our pilots' generation, they were pretty acculturated, and it was also a time of anti-Semitism, so they were standing apart in most cases from their Jewish identity."

Frankel was a bomber pilot in the Pacific in World War II and received the Navy Cross for his heroism in the Battle of Okinawa. He flew 25 missions for the Israeli Air Force as a member of the 101 Squadron before returning to Minnesota.

"I just made up my mind that I was going to do it," he says in the film regarding his decision to volunteer for Israel. "I couldn't live with myself if I didn't do it."

Lenart served in the Marines in the Pacific Theater, then volunteered to fly for Israel and led the Air Force's first combat mission on May 29, 1948, stopping the Egyptians less than 30 miles from Tel Aviv.

"I was born to be there at that moment in history," he says in the film. "It's the most important thing I did in my life." Lenart later helped airlift Iraqi Jews to Israel and became a pilot for El Al Airlines.

The father of actor Paul Reubens (Pee Wee Herman), Rubenfeld was a former stunt pilot who flew for the British Royal Air Force and the U.S. Air Force. He was one of the first volunteer pilots in Israel, narrowly missing out on the Israeli Air Force's first combat mission when there were five pilots, but only four planes to fly. He flew the next day-May 30, 1948-on a critical mission that stopped the Iraqi Army.

Beyond a retelling of the 1948 war, "Above and Beyond" examines the motivations of the foreign volunteers-who were both Jews and non-Jews. It mines the tensions between the Israelis and the Machal foreign volunteers. It reveals how desperately Israel needed planes and pilots at the time. And in recounting the personal stories of the American Jewish pilots, whose experiences in Israel were life-altering, the film is a story of Jewish identity.

"The tremendous historical, unbearable clash of the Holocaust and the birth of the state of Israel, and the loud cacophony that happened between those two events, shook these pilots into a Jewish identity that they might not have otherwise had," Grossman says.

"The pilots felt it was their duty to help, that it was the right thing to do," says Spielberg. "They found their Jewishness through this process." 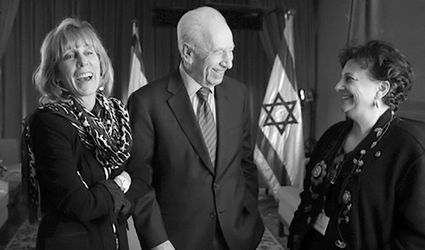 The cost for the Orlando showing is $10 for adults and $5 for students (use promo code: STUDENT). For security purposes tickets must be purchased in advance by May 8 at http://www.aipac.org/AboveAndBeyond, or you can contact Nina Uribe in the AIPAC Florida Office at 954-382-6110. Tickets will be sold on a first come first serve basis, so don't wait too long or there won't be any seats left.