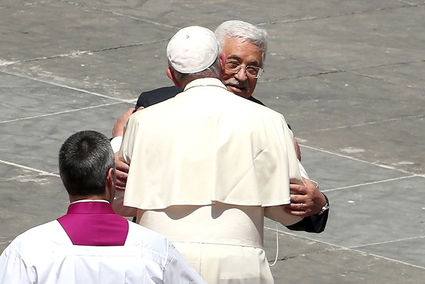 Pope Francis greeting Palestinian Authority President Mahmoud Abbas as the pope leaves St. Peter's Square at the end of a canonization ceremony in Vatican City, May 17, 2015.

Controversy is swirling over conflicting reports as to whether or not the Pope Francis called Palestinian Authority (PA) President Mahmoud Abbas an "angel of peace" during a meeting at the Vatican.

Pope Francis, who canonized two 19th-century nuns from what was then Ottoman-ruled Palestine, met with Abbas at the Vatican's Apostolic Palace, where he presented the PA leader with a bronze medallion and explained that it represented the "angel of peace destroying the bad spirit of war," purportedly adding it was appropriate because "you are an angel of peace."

The pontiff's statement was roundly criticized by the Israeli government pro-Israel commentators.

"For the pope to say something that is so patently false damages his credibility," wrote Jonathan Tobin, senior online editor of Commentary magazine. "Abbas may be many things but he is no angel as well as not being a champion of peace."

"Abbas's career as a merchant of death rather than an angel of peace stretches all the way back to the early 1970s," wrote media personality Rabbi Shmuley Boteach. "According to Abu Daoud, the mastermind of the 1972 Munich Olympic Massacre that left 11 Israeli athletes murdered, Abbas funded the operation."

Israeli Foreign Ministry spokesman Emmanuel Nahshon said, "It is regrettable that Mahmoud Abbas uses international forums to attack Israel and refrains from returning to negotiation, which is the right way to implement a diplomatic vision and a solution of peace."

Vatican spokesman Father Federico Lombardi, who was present at the meeting between Abbas and Pope Francis, sought to clarify the exchange. He explained that the pontiff often gives foreign leaders a bronze medallion representing the angel of peace and that the pontiff merely meant to encourage a commitment to peace through his comments.

"In any case, the sense of encouraging a commitment to peace was very clear, and I believe that the very gift of the symbol of an angel of peace was made by the pope with this intention, as well as previous presentations of the same gift to presidents, not only to Abbas," Lombardi said, the Times of Israel reported.

The Vatican drew scrutiny last week for using the term "State of Palestine" in an official treaty with the Palestinians, leading many to question the pope's commitment to Israel and a negotiated two-state solution.

"We believe that this action by the Vatican, like similar moves by other countries, serves to undermine the prospects for peace, which can only be achieved by direct negotiations between the Palestinian Authority and Israel," said Robert Sugarman, chairman, and Malcolm Hoenlein, executive vice chairman, of the Conference of Presidents of Major American Jewish Organizations.

It wasn't the first time the pope found himself in the pro-Israel community's crosshairs. During a visit to Israel, Jordan, and the disputed Palestinian territories last year, Pope Francis was criticized for an unscheduled prayer stop at the security fence separating Israel and Bethlehem. The stop led to a controversial photo-op in which the pontiff touched the fence next to anti-Israel graffiti, essentially giving fodder to pro-Palestinian activists who use the fence as a symbol of their movement.

But some have downplayed the significance of the new treaty, noting that the Vatican supported the Palestinians' upgraded status at the United Nations in 2012 to "non-member observer state" and has been using the same diplomatic verbiage on a Palestinian state ever since that decision.

"The Vatican has always supported Palestinian statehood, and took the position that it would follow the lead of the U.N. as to when to start referring to it as a fact," wrote John Allen, Catholic affairs editor for the Boston Globe.

He added, "Perhaps the Vatican's communication team might want to consider a boilerplate disclaimer in the future. 'Caution: Not everything contained in the following statement amounts to a revolution.'"