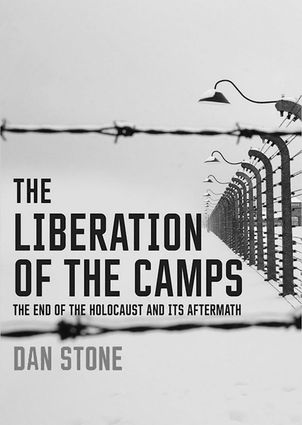 "The Liberation of the Camps: The End of the Holocaust and Its Aftermath," by Dan Stone, Yale University Press, May 2015, 288 pages

Dan Stone's "The Liberation of the Camps: The End of the Holocaust and Its Aftermath" is difficult reading, and not just because it meticulously documents what happened in the Displaced Persons camps in the three years after the war ended. The newly published book also reveals painful facts that we did not know-and that we would rather not need to know.

We did not know, for example, how many thousands of Jews died in the days immediately after the war ended, some from starvation, some from overeating that they were not physically prepared for, and many from inadequate medical care.

No one comes out of this book looking very good, with the exception of the Jews themselves. The British were concerned with preventing the Jewish refugees from getting to the Mandate of Palestine, which would upset the Arabs. The Americans were concerned with keeping immigration quotas in place so that the U.S. would not be swamped with refugees. The Germans were concerned with overcoming their Holocaust-era image and rebuilding their society. The Vatican was concerned with helping Nazis get to South America. The relief agencies were simply swamped by the size of the problems they had to deal with. The Russians were concerned with forcing those whose territories they had taken over into returning there. The Poles were concerned with keeping the homes they had acquired when the Jews were taken away. And the Jews-unable to return to Poland because it felt contaminated, unable to get to Palestine or to America because the gates were closed, and cooped up in what were euphemistically called "Displaced Persons camps"-were caught between all these conflicting and competing interests. For them, liberation was not the joyful celebration that we have been led to believe it was.

The second remarkable fact was that, again with few exceptions, the Jews did not commit suicide. And the third is that they remarried. Broken people, shards of people, widows and widowers-they met in these camps and married. There was a birth explosion in those camps, the likes of which we have not seen before or since. The Jews in the Displaced Persons camps had the highest birth rate of any group in all of Europe. If bringing children into the world is an act of supreme faith in the future, these people must be appreciated as people of enormous faith.

Much of this book is terribly painful to read. The testimonies from the people who lived through those years, which make up the heart of the book, are heartbreaking. But the three aforementioned facts, which are carefully documented and recorded, give us a reason to revere those who clung to their faith despite all they had gone through during both the war and the three transitional years between the Holocaust and the establishment of the State of Israel.