Mondays at 1 (and 7) presents 'Fiddling With Tradition' 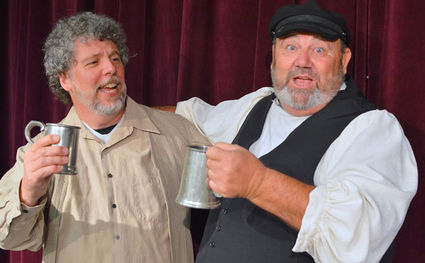 Rabbi David Kay (l) as Lazar Wolf and Tom Limbacher as Tevye do some promotional photo shoots before 'Fiddler on the Roof' opened at The Roth Family JCC last May.

Congregation Ohev Shalom's daytime adult education program, "Mondays at 1," is back with a new three-part series called "Fiddling With Tradition-The Cultural Phenomenon of Fiddler on the Roof." Special for this series, each session repeated at 7 p.m. on the same dates.

This past spring, Kerry Giese, managing mirector of The Roth Family JCC's theater program, and artistic director Amanda Giese took on the daunting task of reviving mainstage productions. They started big, mounting a 50th anniversary production of "Fiddler on the Roof." It was a resounding success, playing to full houses, including a couple of sold-out shows.

"Like so many others of my generation, 'Fiddler' was part of the soundtrack of my youth," observed Rabbi David Kay of Congregation Ohev Shalom, who landed the part of Lazar Wolf the butcher. "The staying power of what seems like a straightforward story of one man's family in the vanishing world of the Pale of Settlement is remarkable. Clearly, there is much more to 'Fiddler' than meets the eye. Something resonates in the hearts of audiences, regardless of age or background."

It was during a promotional photo shoot, early during rehearsals, that Rabbi Kay caught a glimpse into the deeper layers of the musical's narrative. As Lazar Wolf, he and Tevye were on stage, improvising on the characters' on-stage arguments while the photographer snapped away. "You're nothing but a butcher!" Tevye bellowed, "And you're nothing but a milkman!" Lazar shot back.

"And then it hit me," Rabbi Kay recalls. "Jews don't mix milk and meat, so it makes sense that a milkman and a butcher wouldn't get along!"

"Fiddler on the Roof" broke box office records during its multi-year original run. Revivals have filled Broadway theaters and toured the world. Hundreds of licensed productions-from high school drama clubs to professional companies-are staged every year. "It's not fair to call the new production of 'Fiddler on the Roof' coming to town a 'revival'," one critic wrote, "because 'Fiddler' never went away."

Jewish writers and composers essentially invented the uniquely American idiom of the Broadway musical. Yet it wasn't until "Fiddler on the Roof" that they dealt with a completely Jewish theme. Criticized both for being "too Jewish" and for its romanticized version of Jewish life in Eastern Europe in 1905, there is still something about "Fiddler" that gives it lasting and universal appeal.

Sessions for "Fiddling With Tradition-The Cultural Phenomenon of Fiddler on the Roof" will be held on successive Mondays, July 13, 20, and 27, at 1 p.m., with each session repeated at 7 p.m. the same day, and will be held at Congregation Ohev Shalom, 613 Concourse Parkway South, Maitland FL. "Mondays at 1 (AND 7)" is open to the public at no charge. RSVPs are requested, but not required.

For more information or to RSVP, please contact Ronni Radner at (407) 298-4650 or ClergyAsst@OhevShalom.org.