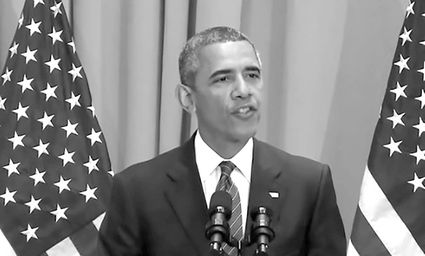 On Aug. 28, 2015, the American Jewish Community participated in the live broadcast of the "Special Address by President Barack Obama" presented by the Jewish Federations of North America (JFNA) and the Conference of Presidents of Major American Jewish Organizations. The address served as an opportunity for dialogue between the president and the American Jewish people on the issue of the Iran Nuclear Agreement. The event was moderated and hosted jointly by the JFNA's Michael Siegal and the Council of Presidents' Stephen Greenberg. The broadcast is the latest in a series of talks on the Iran Nuclear Deal hosted by the JFNA and the Council of Presidents, including in its past roster Israeli Prime Minister Benjamin Netanyahu on Aug. 4.

President Obama took the opportunity to cover some of his personal concerns regarding underlying issues in the debate, addressing for a significant amount of time U.S.-Israel relations in light of disagreement over the Deal. He affirmed that the bond between the United States and Israel consists of bonds over "shared values" and remains strong in the face of policy conflict, as Netanyahu emphasized on Aug. 4. Obama also addressed key technical questions of the Deal, describing in his understanding the restrictive course of events to befall the Iranian nuclear infrastructure at sites like Natanz and Fordow should the Deal become law.

Although he spent most of the time engaged in answering audience questions, Obama covered a great deal of ground in his opening remarks, introduced by Greenberg. The president began by relating three promises that he made during his campaign that he claimed are all accomplished by the Iran Deal. His campaign promises include a commitment against Iranian nuclear weapons, a commitment to preserve the U.S./Israel bond, and a commitment to never hesitate to use military force but to first attempt diplomacy.

President Obama went on to describe how the Deal works to seemingly block "every way to a weapon" for Iran. According to the president, Iran would be forbidden from building any more nuclear material production centrifuges with most existing centrifuges at sites like Natanz removed, and Iran would be forced to ship stockpiles of potent nuclear material out of the country. For the first 10 years after signing the Deal, any nuclear program, civilian included, would be constrained, and after 10 years centrifuges for the production of civilian use nuclear material would be permitted to be installed under international supervision. President Obama claimed that the parameters he outlined could be an effective anti-nuclear program against the Iranians and made the statement that the "world is more or less united, with significant exceptions" in apparent support of the Deal with him.

Siegal relayed the audience questions covering a wide range of concerns from the just less than 5000 people watching. The first question expanded on the theme of personal issues and asked how the dialogue can be "elevated" in the face of the Deal's opponents, including Senator Charles Schumer, D-NY, being called "warmongers." Obama responded by attempting to distance his position from those persons attacking people's motives by affirming that "good-willed people" can come down on both sides of the debate. He continued by explaining how in his perception there actually is little else besides war if the Deal is rejected, although he apparently does not believe that the opponents of the Deal "want war."

Another question continued on interpersonal issues, asking what Obama's response is to the Iranian supreme leader's disregard of respect for the United States Government. The president responded by stating that the United States of America is the most powerful nation in the world, and its president does not respond to what he called "taunts."

Further questions inquired about technical issues of the Deal. With the Deal's provisions expiring in 10-15 years, one audience member asked if Obama worries about the rise of Middle Eastern nuclear proliferation at the Deal's "sunset." The president responded by communicating unease with the possibility but confidence that the world can respond forcefully to the threat. As Obama explained, the antinuclear sanctions do not automatically drop with the signing of the Deal but are only dropped after Iran performs certain nuclear restrictive tasks at Natanz, Fordow, and Arak, among other places. In addition, Obama stated that the U.S. will continue to help Israel maintain its Qualitative Military Edge in the Middle East as an additional measure of defense against nuclear proliferation now and in the future.

After the talk concluded, President Obama's Deputy National Security Advisor for Strategic Communications Ben Rhodes answered questions on the @TheIranDeal Twitter feed, where many participants expressed distrust with the president's remarks. Much of the Jewish Community continues to question the effectiveness of the Iran Nuclear Agreement, agreeing with Prime Minister Netanyahu that a better Deal is possible. A point from Netanyahu's Aug. 4 webcast that we are in a time when Israel and the Jewish people now have a strong voice in security issues represents the Jewish response to President Obama.

Caleb R. Newton is a global relations analyst and pre-law student living in Central Florida. He also writes for The Times of Israel and Dissecting Society.