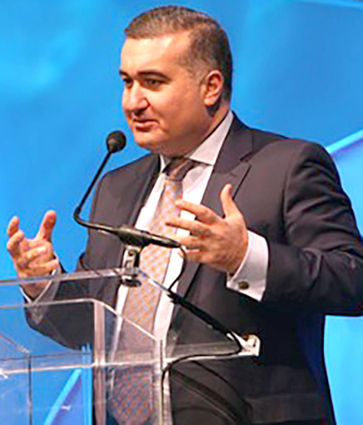 The day after the largest sandstorm in 15 years swept through the State of Israel last week, turning the skies orange and clouding people's vision, Azerbaijan Ambassador to the U.S. Elin Suleymanov says his eyes are opened wide. On his first visit to the Jewish state through Project Interchange, an institute of the American Jewish Committee, Suleymanov tells JNS.org he has been enlightened about issues ranging from Judea and Samaria's Jewish communities to the Palestinians to religion and rhetoric.

The U.S. ambassador from a Muslim-majority country, Suleymanov comes to Israel from a country that is shy of 30 years old and that sits in the Caucasus region on the border of Georgia and Russia to the north, Iran to the south, and Armenia to the southwest and west, with a small part bordering Turkey to the northwest.

A handsome man with a deep smile, dimples, and a hearty laugh, he extends his hand and invites this reporter to dinner. Suleymanov opens up about his perspective on faith, extremism, and American internal and foreign policy in both of these arenas.

"Don't put it in the papers," he says seemingly every other sentence, as he openly waxes on about a plastic factory in the Samarian community of Ariel that employs Arab and Israeli workers, and about a meaningful visit to Kibbutz Nahal Oz near the Gaza border in the south.

He expresses disdain about the state of interfaith relations in Jerusalem's Old City.

"It is not sustainable that they don't talk to one another," he says through a bite of baba ganoush, questioning why Jews and Muslims in Israel cannot live side-by-side the way he describes them as doing so in his homeland.

"In my community, we don't see any difference between Jew and Muslim," Suleymanov says, his chest swelling with pride.

Eventually, the topic of the Iran nuclear deal (inevitably) arises. This puts Suleymanov in a tough spot. Azerbaijan is an ally of Israel (where according to latest Israel Democracy Institute poll, more than 73 percent of Israeli Jews believe the Iran deal is an existential threat), an ally of the U.S. (where President Barack Obama has been vigorously promoting the deal), and on the border with Iran (where between 12 million and 27 million Azeri expats live). Suleymanov is visibly tense in his unbuttoned white dress shirt. He swallows and takes another bite, and then agrees to answer some questions-this time on the record.

Suleymanov: "We welcome that there is an agreement between the two communities. We always felt, these are our neighbors and we don't want to be isolated... We don't want our people to be subject to sanctions. We welcome the lowering of tensions."

Do you support the details of the deal?

"The full details of this deal are somewhat obscure and there are different interpretations-optimistic and pessimistic ones. There are good intentions and good motives, but I think the [negotiators] should have considered all the interests of their Western allies in the region... It is important to satisfy the P5+1 major powers. But... those powers don't live in the region and there should have been have a more inclusive conversation."

Will this nuclear agreement impact Azerbaijan? What's at stake for you?

"What the members of the P5+1 tell us is that this is the best deal they can get. We were not really consulted on the deal during the negotiations. We want to believe there was at least some understanding of the need for safeguards and security in the region, but now we can just hope."

If Iran does not hold up its end of the deal, will a military solution be the alternative?

"There is no military solution. That is why when the international sanctions were imposed on Iran, Azerbaijan observed them. We understood then that sanctions were the only peaceful alternative. Now the agreement appears to be the only alternative to a military solution, so we hope that all sides will observe it, stick to their time tables, the specifics-again, which are yet to be fully clarified to us."

Do you know if the ethnic Azeris living in Iran generally support the nuclear deal?

"They are citizens of Iran and would be first to suffer if there were a military operation... Economic sanctions would affect them, too. I imagine they see the point of view of the overall Iranian population: relief."

It sounds like the U.S. did not include its allies throughout the negotiations, with Azerbaijan among those excluded. Does it matter whether or not American allies, such as your country, support the deal?

"What is an ally? An alliance is built on trust, on a belief that we share goals and stand by each other, that the relationship is reciprocal and equal. It should not be big brother and small brother and sometimes it feels that's what is going on now with America, with this deal. A more inclusive conversation would have meant a better deal... If something is going to happen next door to you, you want to at least be consulted."

Do you feel a decreased commitment from America under the Obama administration?

"We have worked with the Americans since our first day of independence 24 years ago. We have enjoyed an excellent and strategic relationship-security, energy, economic development, now gas. In the last several years, we have seen a lot of rhetoric against us that is not representative of the partnership we have. It is like that for the U.S. media it is comfortable to criticize Azerbaijan. The government's criticism of our freedom of religion is so inappropriate. It would even be funny, if it was not so out of place... Every country has challenges, but we are truly an emerging democracy trying to do what is best for our people."

There have been some complaints from Azerbaijan against America's double standard with regards to the situation in Ukraine versus your situation with Armenia. Can you speak to that?

"If the world had acted to protect Azerbaijan's territorial integrity, then perhaps what is happening in Ukraine would not be happening. Both the U.S. and the European Union are reluctant to speak up in defense of Azerbaijan. It is unbecoming and disappointing."

Why do you think the Middle East is unstable?

"The leaders in the Middle East need to reject extremist ideologies, to give more rights to minorities, promote education... Before taking action, one needs to consider what the outcomes will be. There need to be a strategy and vision, which many in the Mideast lack. And this is true for America-before initiating a policy or intervention, it needs to understand that this may not be contained to a particular part of the world, it could affect everybody. The Syrian refugee crisis is one of the best examples here."

Do you think the Iran deal will affect your country's relationship with Israel?

"Think about the sandstorm we had here yesterday (Sept. 8) in Israel. It did not originate here, but it caused for Israelis a major inconvenience. What happens in the region affects us all. It's a small world. Our relationship with Israel is strong and strategic and sincere-and mutually beneficial. We have very little to do with the decisions being made, but we want all of our friends to comfortable."