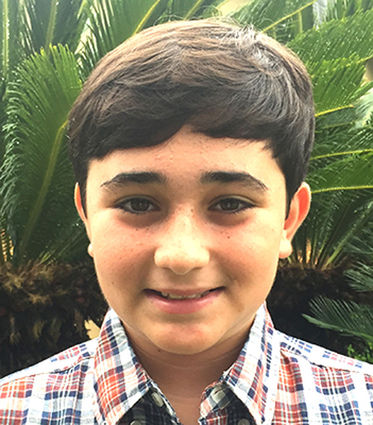 Jordan David Gebaide, son of Robert and Rachel Gebaide of Maitland, will be called to the Torah as a bar mitzvah on Saturday, Oct. 10, 2015 at Congregation Ohev Shalom of Maitland.

Jordan is in the seventh grade at the Jewish Academy of Orlando. His hobbies and interests include cooking, extreme weather, learning about world cultures, Gator football, and Little League. He is also a member of Kadima.

Sharing in the family's simcha will be Jordan's brother, Jonathan; grandparents, Robert Armel of Jacksonville, Fla., Anne Armel of Northfield, Ill., Michael and Lynn Gebaide of Sanford, Fla., and Rietta and Harvey Marks of Boynton Beach, Fla.; great-grandparents, Marilyn Margil of Boynton Beach and Herman Greenewalt of Orange Park, Fla.; as well as friends and family from throughout the United States, Canada, and Israel; and his JAO and COS families.