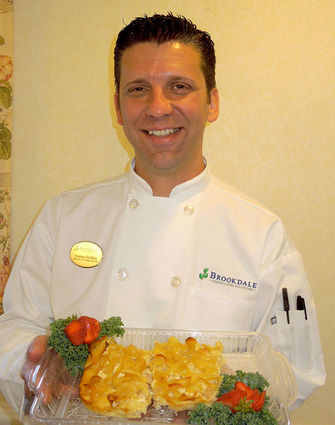 Although Chef Nathan Shifflett of Longwood didn't come from a Jewish mother, he can sure cook like one. The director of Dining Services at Horizon Bay- Brookdale Senior Living, Altamonte Springs, will showcase his award winning kugel at the Jewish Pavilion's, "A Taste in the Park" on Sunday November 8 at the Maitland Civic Center-Venue on the Lake. At the "Taste", he will serve more than 50 pounds of kugel (also known as noodle pudding) to accommodate hundreds of guests at the special tasting event.

Shifflett's kugel is inspired by an old family recipe from his mother, Sally, who grew up in the kitchens of Germany and Hungary, where she developed a flair for European style cooking. A host of ethnic Jewish foods were staples on the Shifflett dinner table. He stated, "Blintzes, briskets, and kugel were dishes my family enjoyed on a regular basis. Matzah ball soup was a family favorite. My mom was a stickler for fresh, with nothing store bought or artificial." Sally inspired a passion for cooking amongst her six children. Nathan noted that four out of his six siblings are "baking in their mother's footsteps", and are currently employed in the restaurant or food service industry.

A prodigy in the kitchen, Shifflett began preparing and selling homemade pastas in the family kitchen in Carrollton, Ohio from the time he was just six years old, and has been cooking ever since. The family store sold fresh and organic foods to discerning shoppers well before the advent of Whole Foods and the off-the-shelf health food market.

Shifflett's talents for Jewish and ethnic cooking have come in handy during his 15-year tenure at Horizon Bay, where he has been director of Dining Services since 2003. Like all Brookdale chefs, Shifflett welcomes recipes from residents, and adds them to his weekly menus to make Horizon Bay feel like home to its seniors. He gets many of his Jewish inspired recipes from the Jewish Pavilion, which brings Shabbats, holiday programming and companionship to Horizon Bay residents, as well as to the elder community in more than 50 assisted living and nursing facilities throughout Orlando.

Shifflett tries to honor special requests from seniors of all backgrounds, and makes a great effort to serve Jewish foods on Fridays to honor the Sabbath for his Jewish residents. He recalled a Chanukah from several years back, when a Jewish resident wanted to ensure that matzah ball soup would be served at dinner. Shifflett honored the request, and went so far as to follow the resident's own matzah ball recipe. He stated, "I learned to put soda water in my matzah balls from this particular senior, and thanks to her recipe, they came out lighter and fluffier than ever. Afterwards, the teary-eyed resident came and expressed her appreciation. She was so moved that someone had cared enough to provide her with a taste of home."

Another secret to Shifflett's tasty matzah balls, is that he grinds the meal himself from matzah, noting that everything made in Brookdale's kitchens are made from scratch. He shared that the soups (matzah ball in particular) are super popular amongst residents as they are made with fresh roasted chicken with onions, lemon, garlic, and rosemary with added parsnips and carrots.

Each month the Horizon Bay kitchen features an ethnic specialty to spice things up for the residents. Shifflett noted that this month residents will partake in Oktoberfest, which will feature a cocktail hour and accompanying cuisines. He shared that Jewish inspired foods are served year-round, and are frequent and popular specialties on Fridays and during holidays.

Nancy Ludin, Jewish Pavilion executive director, is a big fan of Shifflett's Jewish cooking, and personally enjoyed one of his meals when he served a dinner for Pavilion seniors and members of the young adults group, Or Hadash last year. Ludin turned to Shifflett for help when she needed kugel made by the hundreds for the upcoming "A Taste in the Park" fundraiser. Ludin stated, "The Jewish Pavilion wanted to offer a taste of home at a Pavilion sponsored table to showcase what we do for the elder-community. The Jewish Pavilion is known for bringing holidays and challah to elderly residents, but we do so much more on behalf of seniors. We help elder-facilities make their buildings more homey and welcoming to Jewish residents year-round by introducing them to our culture, our customs and even our recipes."

Shifflett obliged the Pavilion's request, and he agreed to make six giant pans of kugel for "A Taste in the Park". He plans on using one of Sally's special recipes for the event, featuring cream cheese, cottage cheese, honey, and raisins, and of course the requisite egg noodles. Like his mom, Shifflett varies the topping depending on what he has available in the kitchen. At this time he has not yet decided he if will top his creation with toasted almonds and/or coconut, glazed cornflakes, or a hand-infused glazed topping. Ludin concluded, "Guests at "A Taste in the Park" are in for a real treat, thanks to Chef Nathan Shifflett. Stop by the Pavilion table early so you don't miss out on this special taste of home."

Register now for the Jewish Pavilion's "A Taste in the Park" taking place from 12-3 PM on Sunday November 8th, at the Maitland Civic Center-Venue on the Lake at https://thepavilion.webconnex.com/taste2015. Enjoy Nathan's Shifflett's artisanal kugel along with tastings from scores of Orlando's favorite eateries, with fun and entertainment for the whole family. Eat, drink, and be charitable, with all proceeds benefiting seniors in elder-care. For more information about the Jewish Pavilion visit http://www.jewishpavilion.org or call 407-678-9363. For more information about Nathan Shifflett or Horizon Bay visit http://www.brookdale.com.