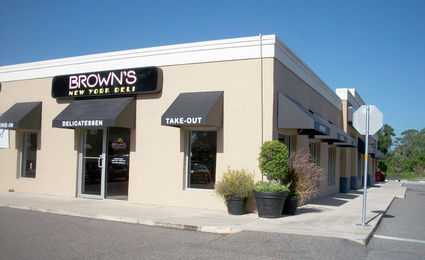 "We have just smoked and cooked the last 40 lbs. of our amazing pastrami and corned beef... made fresh soups and salads, and received our last delivery of fresh breads this morning. Opening at 11 a.m. and staying open until we sell out," said the email sent out on Oct. 16 to all of Brown's Deli's regular patrons. The subject line said: Brown's Deli is closing. Sadly, that was the last day for the only kosher restaurant in the Maitland/Altamonte Springs/Casselberry/Winter Park area.

The little kosher deli that sat on the corner of 17/92 and Lake Ave. opened its doors a little over two years ago. In fact, it was the first story this editor covered upon her return to The Heritage.

The email was the only public notice given. Even though owner Lauren Brown and the staff knew a few weeks before that the writing was on the wall, she wanted to give her employees time to find other work and to prepare her last batch of brisket, corned beef and other meats, and not order more from her supplier. "It takes several weeks to prepare the meat before cooking it," she explained.

Gone now is the homemade brisket (her mother's recipe) and the stuffed cabbage that was prepared following her grandmother Sophie Schwartz's, recipe.

What happened? "I gave it two and a quarter years, but it just wasn't doing enough volume to sustain it," said Brown. "I'm proud of it," she continued. "It had wonderful reviews and I'm proud of what I accomplished."

That last Friday, the deli was full to capacity. "If I could go at business everyday like this, I'd still be in business," Brown said laughing. "It was hard work," she said. "I worked six days a week and loved it. It was always great to see everybody who came, but it just didn't hit the numbers needed."

Brown closed the deli in the lobby of the JCC a few months ago, but will continue with the school lunch programs at the Jewish Academy of Orlando and another area private school.

Since closing the restaurant, Brown is turning her attention to another interest and possible business venture: Forming a kosher co-op.

"Kosher meats are so expensive," she said. "I have access to the food, to buy kosher meat." She has friends and customers who would ask her to purchase meats for them when she would place her food orders for the restaurant. "I'm not sure when it would be coming, but it certainly would be helpful for the community."