Netanyahu to Jewish Federations: U.S., Israel 'should work together now' on Iran 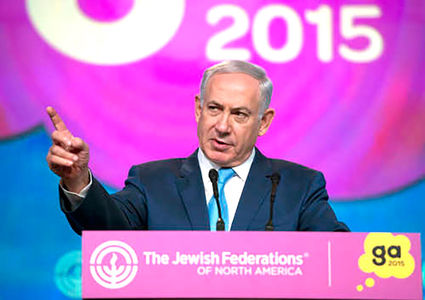 Prime Minister Benjamin Netanyahu addresses the General Assembly of The Jewish Federations of North America on Tuesday in Washington, D.C.

Despite their disagreement over the Iran nuclear deal, the U.S. and Israel "can and should work together now" to ensure that Iran complies with the agreement and to curb Iranian aggression throughout the Middle East, Israeli Prime Minister Benjamin Netanyahu said Tuesday at the General Assembly of The Jewish Federations of North America (JFNA) in Washington, DC.

A day after meeting with President Barack Obama at the White House, Netanyahu told the JFNA delegates, "You work tirelessly to strengthen Jewish identity...you are my partners in building the Jewish future." He said the Jewish community should "always remember two simple truths." First, that regardless of any disagreements between Israel and the U.S., "Israel has no better friend than America and America has no better friend than Israel."

Second, mirroring JFNA President and CEO Jerry Silverman's call for post-Iran deal unity a day earlier, Netanyahu said, "No matter what disagreements there have been within the Jewish community, maintaining the unity of our people is of paramount importance... we must work together to unite the Jewish people and secure the Jewish state."

Regarding U.S. military aid to Israel, amid reports that Israel is seeking an increase in annual aid from $3 billion to $5 billion, the prime minister said that he had a "wonderful discussion with President Obama [at the White House] on how to secure that assistance for the coming decade."

"Thank you America," he said.

Netanyahu noted the importance of Obama's commitment to bolstering Israel's qualitative military edge, so that Israel can defend itself-by itself-against any threat.

"This is democracy. This is intense, robust democracy," Netanyahu said, adding, "What is truly remarkable is that Israel upholds these values in the darkest and most oppressive region on Earth."

Netanyahu expressed hope that the JFNA crowd would get to share his experience of visiting Israel Defense Forces soldiers, who are "inspired by their deep faith in the justice of Israel's cause."

"These are the new Maccabees," he said. "They have such fortitude, such courage... Israel's future is in very, very good hands."

"Today we have a voice, and we must ensure that our voice is heard loud and clear. We must speak out against the slander of the Jewish people and the Jewish state... The only way we fight lies is telling the truth," he said.

While the Palestinians refuse to recognize a Jewish state of any boundaries, Israel seeks peace, said Netanyahu-noting that when it came to Arab leaders such as Egypt's Anwar Sadat and Jordan's King Hussein, Israel indeed made peace.

On Monday at the White House, Netanyahu and Obama met for the first time in more than a year in a bid to put aside past differences over Iran's nuclear program and advance peace in the region.

"This is going to be an opportunity for the prime minister and myself to engage in a wide-ranging discussion on some of the most pressing security issues that both our countries face," Obama said before the meeting. "It's no secret that the security environment in the Middle East has deteriorated in many areas, and as I've said repeatedly, the security of Israel is one of my top foreign policy priorities. And that's expressed itself not only in words, but in deeds."

A day before the White House meeting, U.S. Ambassador to Israel Daniel Shapiro told JNS.org in an interview on the JFNA General Assembly's "Press Stage" that the meeting marked the latest chapter "in a relationship that obviously goes through certain phases and certain cycles, the fundamentals of which, the bedrock and the basis of which, really has never changed, and that's a positive thing."

"It has never changed in the sense of a very strong, deeply felt commitment and policy in terms of our own interests of having the closest possible relationship with Israel, in helping Israel achieve its goals of security, its qualitative military edge, its ability to defend itself, particularly in a very chaotic and dangerous region, and its goals of achieving peace with its neighbors, including a two-state solution with the Palestinians," Shapiro said. "Those have always been bedrock principles and nothing about them has changed, even though we have been through complicated periods in this relationship, even though particularly in the last year, we've been through very public disagreements in this relationship. So one of things I think we're looking for tomorrow (Monday) is a sense of a chapter having closed."

According to the White House, the two leaders tackled regional security issues, including the implementation of the Iran nuclear deal, how to prevent Iran from obtaining nuclear weapons, and countering Tehran's destabilizing activities.

In his public comments, Obama referenced the differences over the Iran nuclear deal with Netanyahu, but said that both leaders are committed to preventing Iran from acquiring nuclear weapons. Netanyahu thanked Obama for his commitment to Israel's security.

Obama condemned the recent wave of terrorism in Israel, saying that it is his "strong belief that Israel has not just the right, but the obligation to protect itself."

Netanyahu assured Obama that he remains committed to see "two states for two peoples, a demilitarized Palestinian state that recognizes a Jewish state."

Amb. Shapiro told JNS.org regarding U.S.-Israel disagreements on the Iranian nuclear issue, "We can't deny that over the last year we had a very difficult, very public disagreement, and one never likes to have a public disagreement with a friend or someone close to you. Imagine arguing in public with a spouse or a sibling or a close friend, it's not pleasant. Particularly on something so important. It was an honest disagreement about a shared strategic goal of ensuring that Iran never achieves a nuclear weapon, but a disagreement about the best way to achieve it. I think maybe we could have made different decisions about how it was expressed, but, it's over. The [Iran nuclear] deal has been signed, it's been implemented, it's passed its Congressional review, and it's the very clear intention of both sides going into this meeting that we're not going to rehash that disagreement, it would be pointless to do so."

The Obama administration, said Shapiro, has "no illusions, never have, that Iran continues to be a very dangerous actor in the region, that sponsors terrorist organizations, that provides weapons to Hamas, Hezbollah, and others that destabilizes other regimes, and that we [at the U.S. Embassy] in Israel have already been working-by sharing intelligence, and interdicting weapons shipments, and other means-to counter those threats, but we're going to need to intensify that effort in the years ahead. We have a common interest that the civil war in Syria does not spill over and affect Israel through violence or through other threats."