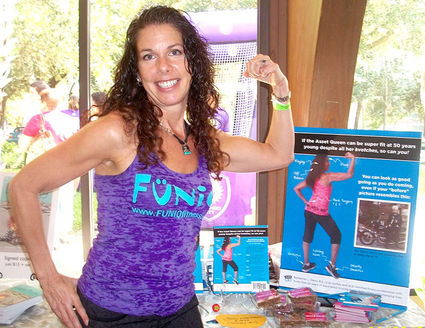 Back in the 60s, American band Sly and the Family Stone got everyone on their feet with their hit song "Stand!" ("You've been sitting much too long"). Today Bethanne Weiss, aka the Asset Queen, is singing that same tune in her new book, "Move Your Assets: From the Chair, Not the Bank!," encouraging her "peops" to stand more and sit (on their assets) less. She says in the book, that it hit her like a "one-pound brick of butta," that those who move more than they sit have less kvetches, ailments and jiggles than sedentary people. This realization is backed by a multitude of professionals in the medical field, including Hippocrates, who said, "Walking is man's best medicine."

Weiss could probably inspire a stone to move. I am sure of it. I've never done an interview while standing, but that is exactly what happened the day she came into the Heritage to talk about her book.

We didn't start out standing, but since I'd already been reading her book to prepare for the interview, I was accustomed to standing for longer lengths of time just because I get kind of antsy now if I sit too long (it wasn't always that way, I was a certifiable couch potato as well as an editor-in-chair). As we talked about various movements that strengthen and tone, the natural migration was to stand and try out new movements.

To talk with her is to get free fitness instruction. After all, she explains that her purpose on this planet is "to motivate you off your soft seat and on to your zany feet." But Weiss can't be everywhere all the time. So she wrote the book, which was a great idea because reading "Move Your Assets" is like being in the room with Weiss.

Weiss is a natural at personal training and she knows her stuff. She has a degree in marketing and a minor in exercise science and became one of the original International Dance Exercise Association Certified Aerobics Instructors. She is also an American Council on Exercise certified fitness and nutrition professional with more than 25 years of experience. She came to Orlando in 1998 and started a singles' program and a fitness program at The Roth Family JCC in the spring of 1999. Later, in 2001, she started Better Butts by Beth, her own personal training business, and FUNIQ Fitness, group classes in which she created fun and unique movements to work all the muscle groups.

Weiss wasn't always the svelte figure-of-a-woman that she is now. She joined the army at age 19 because she wanted discipline in her free-spirited life. She failed all the fitness ability tests and was put in the Fitness Training Company (FTC), which was where new recruits went when "you are too out of shape to even think about going to boot camp." She eventually passed FTC, graduating to real boot camp.

Weiss shares this story of army life and many more stories about her life to help readers relate to her-knowing that she has overcome much and we readers can too.

When Weiss says she feels your pain, she does. She has frighteningly flat and pronated feet (the army doctor couldn't understand how she was able to get into the army), has had two back surgeries and suffers from chronic dizziness. She is always off balance, has ringing in the ears, and wears custom orthotics. How can anyone give an excuse not to move her assets around Weiss? In fact, Weiss provides a vast amount of verifiable information from sources such as the Mayo Clinic, Centers for Disease Control and Prevention, the American Council on Exercise, and many more on why it is so important to move your assets.

But this is not a yawn book about fitness. With her own litany of "Bethisms" (i.e., dahlink, New Yawk Jewish for darling; jiggling, excess body fat; yada, yada, yada, and so on) and Yiddish-ish words (i.e., plotz, collapse; svelte, somewhat lean and unjiggly) Weiss keeps her readers laughing (which is good for the abdominal muscles) as they move their way to svelte.

There aren't pictures of different exercise movements in the book. Nothing like "Do this for 20 minutes this way." She doesn't tell you to exercise, workout, diet or focus on losing weight either. Instead she encourages her readers to add something positive back into their life: movement, all kinds of movement: From parking the car far from the store to taking the stairs whenever possible to standing while on the phone, typing, thinking...

As I was reading "Move Your Assets," I became aware of how much I was sitting and started standing and walking more. And you know what? Without changing anything else in my life, except to stand and walk more than sit, a pair of pants I'd just bought two weeks earlier (and fit like a charm) were too big on me! I had gone down a dress size!

Don't just take this writer's word for it, some of the reviews on amazon.com (where you can purchase the book for $16.95) are: 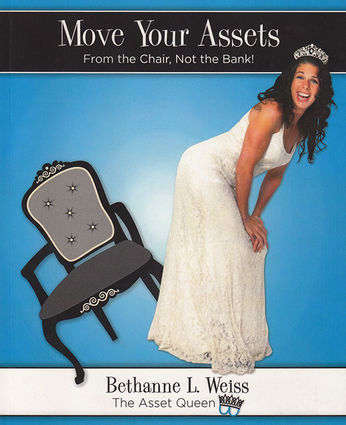 "This is a very funny, yet educational book on a very serious subject. As diabetes and arthritis takes a hold of our aging (and "bigger") bodies, we are reminded by Mrs. Weiss how important it is to stay in shape-and making us get into hysterics page by page."

"I love this book!! The reason I like reading it is because it is not written like any book I have ever seen. I never got bored of reading this at any point, which I cannot often say about a book."

To learn more about Weiss' book or training classes, visit http://www.moveyourassets.com or http://www.funiqfitness.com

As I finished this review, I realized the first lines from Sly's song "Stand!" say perfectly what "Move Your Assets" can do for its readers: "Stand! In the end you'll still be you, One that's done all the things you set out to do."