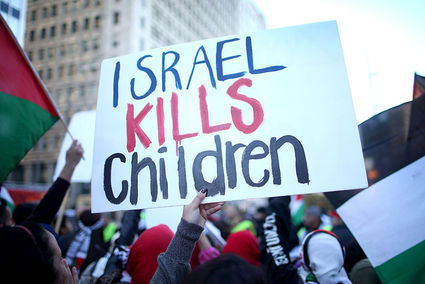 A group of prominent academics has formed the Academic Engagement Network to combat the vilification of Israel on university campuses.

WASHINGTON (Washington Jewish Week)-Alarmed by what they called "Orwellian efforts" to link Israel with a multitude of free-speech issues now roiling American college campuses, a group of influential academics has launched an initiative to combat anti-Semitism and facilitate constructive dialogue about Israel.

Led by Mark Yudof, president emeritus of the University of California system, and Kenneth Waltzer, former director of Jewish studies at Michigan State University, the Academic Engagement Network has taken it upon itself to combat "Orwellian efforts to link Israel with a multitude of issues, from the shootings in Ferguson to high levels of student tuition."

"In the face of activities aimed at vilifying Israel, AEN members will facilitate robust and civilized discussions relating to Israel on campuses, promote academic freedom and freedom of expression, stand for human rights for Arabs and Jews, and engage colleagues and students to better understand these complex issues," Yudof, the network's chair, said in a statement this month.

Network members will act as resources on their campuses and provide advice to academic colleagues on how to address anti-Israel and anti-Semitic activities without trampling on free speech.

A manual titled "Academic Freedom and BDS: A Guide for University Presidents and Administrators" is in the editing stages, with an intended release date of early January, in time for the spring semester.

Stephen Trachtenberg, president emeritus of George Washington University in Washington, D.C., described the network as a group of concerned academics who "have devoted themselves to making it possible for people from all points of view... to speak candidly and without disruption."

In recent years, student protesters have taken to shouting down invited Israeli guest lecturers. In early November, Assi Azar, an Israeli television personality and LGBT rights advocate, was interrupted during a discussion of his film "Mom, Dad, I have Something to Tell You" at Goucher College in Baltimore. Last winter, masked protesters wielding electronic noisemakers and carrying signs reading "Ferguson, Pittsburgh, Gaza, Fight Back," disrupted a talk by a former Israeli army medic on gender roles during wartime.

Preventing invited guests from speaking and spreading misinformation are among the methods Trachtenberg and his fellow AEN board members describe as "anti-intellectual" and harmful "for peace and for academic freedom."

"On some campuses, certainly, issues that are either popular or unpopular off campus in the larger community sometimes find a way to the campus and it causes no small degree of indigestion, if you will," said H. Patrick Swygert, president emeritus of Howard University in Washington, D.C. "But I've never been one to be persuaded that silence or simply just going along [is the right response]."

Swygert, who has been an academic for nearly four decades and has taught at Israeli universities, said he has heard "obvious untruths about the State of Israel with no rebuttal."

It is a university president's duty, he said, to "be clear in the sense that the university has values and one of them is free speech in contrasting and opposing ideas."

There is a space for serious debate on Israel if "the president is able to articulate what the reality is of Israel as an open democratic society in a volatile part of the world," Swygert said.

Trachtenberg agreed, saying he would like to see robust debate on campuses, perhaps in the same vein as the 2015 Oxford University debate on the Boycott, Divestment and Sanctions movement, or BDS, that pitted American lawyer Alan Dershowitz against British human rights activist Peter Tatchell. Dershowitz was declared the winner.

"We ourselves are critical of Israel. We don't claim perfection for Israel and no one expects us to do that," said Trachtenberg. "We're not afraid of fair criticism of Israel. ... We simply think that the kind of behavior that BDS advocates is bad for universities, bad for scholarship, [and a] bad way for advocating their position."

For Trachtenberg, his affiliation with AEN "transcends the issue of Israel."

"It has to do with what I'm focusing on, which is the American university," he said. "[We need] to enable deliberations which are based on facts rather than opinion."

AEN's national advisory board members include psychologist Steven Pinker of Harvard, Holocaust historian Deborah Lipstadt of Emory, and Lawrence Summers, a past president of Harvard and former secretary of the Treasury.