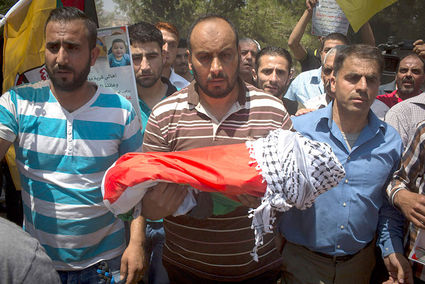 The body of 18-month-old Ali Saad-Dawabsheh, surrounded by relatives, is carried at her funeral in the Palestinian village of Duma, in the West Bank, July 31, 2015.

JERUSALEM (JTA)-The chain of events is familiar: Israel's security forces detain a terrorism suspect, deny him access to his lawyer and interrogate him.

The detainee alleges that he was tortured during the interrogation. His lawyers decry the abuses and are backed up by Israeli human rights groups. Supporters of the detainee riot in the street, injuring Israeli forces. The Israeli government denies the charges and condemns the rioters.

It's a progression that has occurred time and again with Palestinian detainees, and it happened again this week. But this time there's a twist: The detainees are not Palestinians but Jews suspected of torching the home of a Palestinian family in the West Bank village of Duma in July, leading to the deaths of three members of the Dawabshe family-18-month-old Ali Saad, and his parents, Saad and Reham. (The Dawabshes' 4-year-old son was seriously injured in the attack.)

Held since November in administrative detention, or imprisonment without charge, the three Jewish youths were barred from seeing their lawyers until Saturday night. The as-yet unnamed youths and their attorneys have since alleged that the Israeli Shin Bet intelligence service tortured them during interrogation-depriving them of sleep for days, slapping and kicking them, blindfolding them, and hitting their "sensitive organs."

The Shin Bet responded with a statement accusing the suspects of killing Palestinian innocents and wanting to overthrow Israel's government. The service affirmed that it obeyed the law even during "intensive" interrogation sessions and condemned "an ongoing, directed effort aiming to defame the organization."

The suspects have since found strange bedfellows advocating for their rights-the very human rights activists who usually condemn the youths' right-wing backers. A statement from the Association for Civil Rights in Israel called the alleged torture of the youths "undemocratic and illegal."

"This isn't the first time we've found out about torture," ACRI spokesman Yaron Kellner said Tuesday. "We think this is unacceptable and immoral, and damages human rights in a shocking way."

Israel has long employed administrative detention against Palestinians suspected of terror, and is holding several hundred without charge. Days after the Duma attack, facing charges of inaction in the face of Jewish extremism, Israel announced it would employ the tactic against suspected Jewish terrorists as well.

But while Palestinian terror suspects are often arrested shortly after an attack, the Shin Bet arrested the youths only in late November-and have not yet gathered enough evidence on the Dawabshe attack to charge the suspects. On Tuesday, a West Bank Palestinian home was attacked with smoke grenades, apparently by Jewish extremists, and graffitied with the words "Revenge" and "Regards [from] detainees of Zion." A 9-month-old baby and his parents were asleep in the home.

For the Duma suspects, the Saturday meeting with their attorneys was their first and came three weeks after the youths were arrested. In a heated news conference Sunday, the lawyers accused the Shin Bet of violating the suspects' rights and torturing them.

Itamar Ben Gvir, an attorney and far-right political activist, said the Dawabshe murders remain "unsolved," and suggested Tuesday that any confessions made during the interrogation are invalid because they came under torture.

On Sunday, hundreds of right-wing Israelis protested the alleged torture. Six police officers were injured during the demonstrations.

"After this interrogation, there is no more democracy," Ben Gvir said at a news conference. "This is a dark day for Israeli democracy, when Shin Bet interrogators and police officers let themselves abuse, hurt, punch and pressure boys' sensitive areas. There's no democracy."

Speaking Tuesday, Israeli Prime Minister Benjamin Netanyahu defended the interrogators' actions and said the Shin Bet is "doing important and excellent work for the people of Israel and for the security of Israel."

And the Shin Bet, in its statement, said the Jewish group alleged to have been behind the Duma attack is a terror organization "characterized by extremist, anti-Zionist ideology, whose goal is to change the regime in Israel through violent means."

The Shin Bet hopes to issue an indictment in the case in the coming days. But Kelner says that even if the case is solved, the past week's controversy shows violations of civil rights are likely to continue.

"We're on a slippery slope," he said. "We always say that human rights are a universal value and the rule of law is universal, and it must treat everyone equally, but when violation of human rights begins with one group, it will move to other groups. The chance that this will grow is not small."