More Christian-Arab Israelis enlisting in Israeli military than ever before 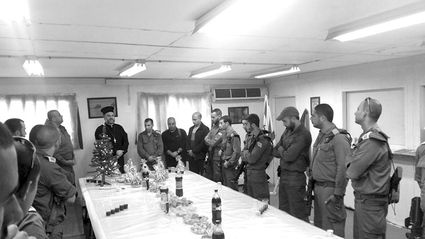 Amid increasing discrimination-and even violence-against Christian minorities across the Middle East, a small program in Israel is dramatically increasing the number of Christian-Arab Israelis who join the Israeli military, with the aim of integrating this minority population into mainstream Israeli society.

With support from the International Fellowship of Christians and Jews (The Fellowship), the Israeli Christians Recruitment Forum, led by Father Gabriel Naddaf of Nazareth, is multiplying the number of Christian Arabs enlisting in the Israel Defense Forces (IDF) from just 40 in 2012 to more than 100 in 2014. In March 2015, 102 Christian Arabs were inducted into the army, through the Forum.

Minorities in the Jewish State are not drafted into the IDF, although the Arab Druze minority has remained an exception and Druze have faithfully served since Israel's creation in 1948. Father Naddaf hopes some of Israel's 165,000 Arab Christians, whom he prefers to call "Israeli Christians," will follow, identifying and being perceived as patriotic Israelis rather than enemies of the state.

"Calling them 'Arab-Christian' puts them on the side of Palestinians and terrorists, when, in reality, they've lived in Israel for generations and just want to live in peace and security," said Naddaf.

The Forum, which also provides financial aid to needy Christian families and discharged soldiers, does not receive government support, but last week Father Naddaf and The Fellowship were recognized by Israel's Defense Minister, Moshe Yaalon.

"I believe Israel's Christian community should integrate more into mainstream Israeli society," said Naddaf. "Why do the Druze serve? Why do the Bedouin serve? But not the Christians? It's because they're scared. This has to change. It's time to say in a loud and clear voice: enough."

At a Jerusalem ceremony, Father Naddaf thanked "Christian donors around the world" for supporting him through The Fellowship. "Your assistance is essential for the strength of Israeli society," he said. "This society will achieve peace and defeat evil."

This Monday, Father Naddaf gathered some of these Israeli Christian soldiers for a Christmas party, delivering treats and thanking them for their service to Israel.