Who is going to make Ben's famous challah? 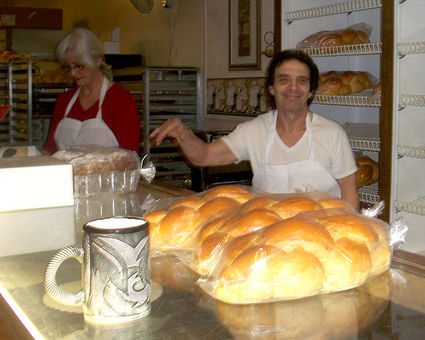 Ben Brenslauer and his famous challah.

After 15 years, Ben's Bake Shop closed at 5 p.m. on Dec. 24, 2015. No more challah-at least for now. On Wednesday, Dec. 23, Michael Fischer went to the bakery at 7 a.m. to be sure to get some of Ben's famous challah. When he got there, a line had already formed and by 8 a.m., when the bakery opened, that line was all the way down the block. It took only one and a half hours to sell all 100 loaves.

Later that afternoon, the glass shelves in the display case were almost empty. Only two yule logs, a stollen, a dozen or so éclairs and butter cookies were left for the day. Several customers came in asking for challah.

"We're out, there will be challah tomorrow. No, we don't take orders for the challah. It's first come, first serve," said the sales clerk.

Surprisingly, there wasn't a line outside the morning of the 24th. Inside there were about six customers, all wanting challah.

"This is so sad that he is closing," one customer said.

Owner Ben Brenslauer had some bad news. The deal he had hoped to make with The Pantry Café's owner, Alden Mamann, didn't work out. Bresluear wasn't pleased with the kitchen at The Pantry. "It's all stainless steel. I work on a wood table. And the oven isn't big enough," he told the Heritage.

Disappointed, Brenslauer just couldn't bring himself to make a deal. Which means, there is no one to supply challah at this moment to the Roth Family JCC or the Jewish Academy of Orlando. Oh, there is challah to be had, just not Ben's Bake Shop challah.

Brenslauer does have one glimmer of hope. Rabbi Dubov of Chabad wanted to meet with him. Brenslauer did not say what they would be discussing, but he did share with The Heritage that he would like to teach children how to make his challah.