UCF student is shining a light on the Middle East 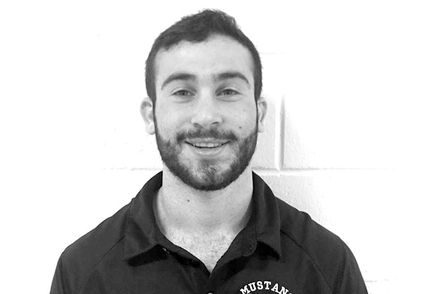 It's a highly contested and complicated region, one where the entanglement of history, religion and politics causes most students to shy away from learning more about it. But University of Central Florida freshman Jared Dipsiner isn't daunted by the challenge. He's even taken his interest in the Middle East a step further, making it his responsibility to relay the hard facts to both local and distant communities.

"I feel like the Middle East is, in [some] people's minds, a primitive and barbaric area, but in reality, it's not at all," Dipsiner said. "I want to change people's viewpoint on it."

Dipsiner said he became intrigued with the Middle East after participating in the Bob Malkin Young Ambassadors Teen Leadership Program, made available to Jewish high schoolers by the Jewish Federation of Sarasota-Manatee. His two-week trip to Israel in June 2014 laid the groundwork for Middle Eastern News.

When Dipsiner arrived with his group, they found a nation enmeshed in prayer. Their plane landed in Tel Aviv the day after Hamas members kidnapped three Israeli youths: Gilad Shaar, Naftali Frenkel and Eyal Yifrach.

"Living in the United States, most people never experience any sort of hostile environment where their safety could very well be at risk," Dipsiner said.

Amidst the tension and uncertainty, the students learned about the political and economic aspects of the region. Dipsiner said he became more familiar with how Middle Eastern countries work together, or in some cases, how they don't.

After more than two weeks of agonizing searches, security forces discovered the teenagers' bodies in the West Bank and within a week, Israel launched Operation Protective Edge.

By this point, Dipsiner had returned to his home in Sarasota, Fla. He said leaving Israel made him reflect more upon his experience, prompting him to research Middle Eastern history and read more into the daily news.

Dipsiner said he saw the Middle East as a land of beauty, not devastation and ruin. In an effort to show people the whole picture, void of biased or slanted views, he launched his website. Nearly six months later, he created a Middle Eastern News Twitter account, which has attracted over 450 followers from 17 countries.

"Many of my followers aren't from my local area, which I actually like," Dipsiner said. "I think it's great that I'm reaching out to people across the world and not just where I live."

Three months ago, Dipsiner expanded his multimedia project to include a video segment. He's interviewed over 20 students on the UCF campus, providing them with factual information about topics ranging from the Syrian refugee crisis to the Egyptian-Israeli peace treaty. Dipsiner then asked his interviewees to share their personal thoughts on camera.

"I didn't have as much user interaction as I wanted, and that's actually why I started the videos," Dipsiner said. "I feel like if I incorporate more people that are in the local area, it just might spring some sort of conversation."

With hopes of reaching a wider audience, Dipsiner recently accepted help from Andrew Max, the Israel engagement coordinator for Central Florida Hillel, a center for Jewish life at UCF.

"What's great about Jared is that his passion leads to action," Max said. "[Middle Eastern News] didn't exist before he got here. Most of the time, you see someone get groomed into this kind of role."

In addition to manning the camera during student interviews, Max meets with Dipsiner twice a week to brainstorm ideas, frame interview questions and discuss logistics.

"Hillel is just here to offer its support," Max said. "This is Jared's project. I'm never telling him what to do. I'm just helping him polish his content."

Even though Middle Eastern News is steadily growing, Max acknowledges that there's still a great deal of work to be done.

"Right now, it's not a perfect project," Max said. "We don't have a grand month-to-month or year-to-year vision of what we're trying to accomplish, but that'll come. Jared's working really hard to make sure that we get there."

Both Max and Dipsiner are looking for a higher degree of student involvement in Middle Eastern News this semester, including people who will help from behind the scenes.

With the introduction of the video segment, Max asked freshman and film major Jesse Slomowitz if he would be interested in assisting with the editing process. He accepted the position.

"Jared is giving people the building blocks to go and form their own opinions," Slomowitz said. "Hopefully it'll teach people to hesitate before jumping to one side so quickly, which is what happens a lot these days." 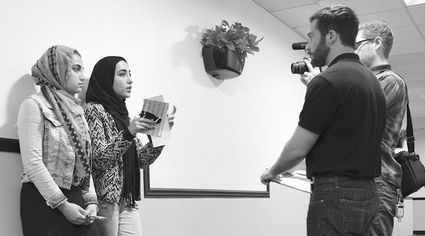 Dima Alshaibi (l) and Heebah Ahmed answer Jared Dipsiner's questions about the Islamic state for one of his videos as part of his Middle Eastern News.

Slomowitz said Dipsiner's dedication to raising awareness is what drives the site. He brings the information to the students, which is half the battle.

And Dipsiner is ready to get back to work. After nearly a month off from school for winter break, the UCF campus is bustling with students once again.

"I want to educate people," Dipsiner said. "A lot of people hear about what's going on and most of the time, they don't really understand how it all fits together. I'm looking to change that."