Acting out history at Temple Israel 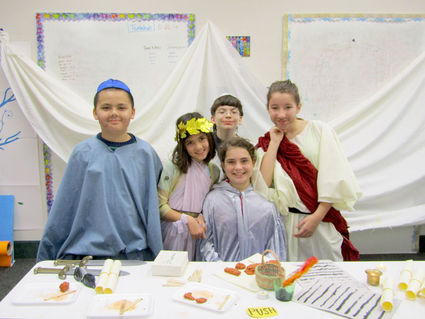 First Century Roman Judea marked a pivotal time in the history of the Jewish people. Many important and influential leaders helped to shape Judaism into what it is today. The characters portrayed by students in Eliana Gershon's third through fifth grade class at the Meitin Religious School at Temple Israel, whether admired or feared, were key players in transitioning our people out of Hellenistic Judaism into the early stages of what would become modern day Rabbinic Judaism.

It is a strong belief of Gershon's that students can reap more understanding through interactive and creative learning. She wanted students to gain both an understanding and appreciation for this time in our history, while also feeling a sense of connection to these characters. This belief inspired the First Century Wax Museum.

Each student chose from a list of key figures to research and represent in the museum. The class spent several weeks compiling information by utilizing the school's resources. Students had access to the Internet via personal tablets as well as the synagogue library and insight from Rabbi Neely. They crafted speeches that touched on their characters' personal lives and accomplishments, while also letting their unique personalities shine through.

When "opening day" drew closer, the class learned about first century clothing and began creating and choosing props and costumes for their stations. All that was left to do was set the scene.

On Feb. 11, the Wax Museum was opened to the public. Parents, students, and other congregants proceeded into the room. There they were greeted with Roman style music and a dark environment, dimly lit with candles. Gershon's students sat or stood perfectly still as if they were wax figures. However, this was no ordinary wax museum. At each student's station there was a paper "button" that read "push." When the buttons were touched, the students would come to life and deliver their monologues before resuming their frozen state. Guests were prompted to tap the button again if they had questions. It was remarkable to watch how much detail was put into each project. From head to toe first century garb to a classroom transformed with cascading fabric and hand-picked props.

Mckenna Sachs, who played the role of Josephus, facilitated a hands-on activity where museum guests could carve their names into a piece of clay to later be drawn in a lottery. Winners of this lottery had a much better fate than those on Masada, earning five paper "shekels" to be used at the synagogue gift shop. Leor Adelman created a handmade book to accompany his character, Yehuda Hanasi, who famously compiled the Mishna. Students Will Berg and Rachel Crane brought smiles to museum-goers with their humorous and witty dialogue as Rabbi Akiva and Bar Kochba respectively, while Emma Berg's sweet speech as Queen Salome Alexandra was brightened by her elegant throne and regal costume.