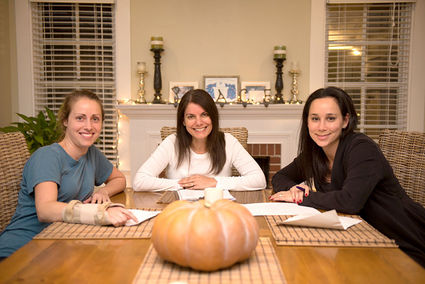 The Jewish Federation of Greater Orlando's Our Jewish Orlando (OJO) held its first-ever Shabbat Potluck on Feb. 12 at the home of Aleah Mathews.

Seventeen young adults brought main dishes, appetizers, side dishes and desserts, and came together to celebrate Shabbat under the stars after a busy work week.

"It was a fantastic evening with old and new friends enjoying a delicious meal together," said OJO Co-Chair Eric Sugarman. The event was organized by committee members Mathews and Lauren Mielziner Bubis.

Mathews said she was "thrilled" to host the Shabbat dinner. "I received fantastic feedback from everyone who attended," Mathews said, "and I am looking forward to opening my home again in the near future. I love that at each event, I have the opportunity to meet new people. It makes participating in OJO so meaningful and fun!"

Our Jewish Orlando continues to expand its programming to provide Central Florida's young adults more ways to connect with one another. Next month, on March 22 at 7 p.m., OJO will begin an informal educational series, "OJO's Coffee Talk" at Stardust Coffee in Winter Park. Cantor Kim Singer of Temple Shir Shalom will be kicking off the series with a Purim-themed conversation about Queen Esther, and what really happened before she became queen. More information about Coffee Talk and OJO's next Shabbat dinner on April 1, can be found on OJO's Facebook page and the Federation's website, http://www.jfgo.org.