Bat mitzvah project entertaining and beneficial to the IDF 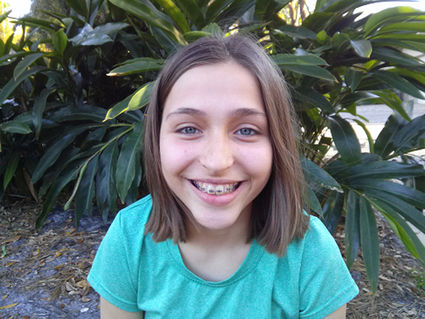 Miriam Crane-producer, director and MC of the FIDF Talent Show.

Got talent, drive and a strong desire to help the IDF? Miriam Crane does! As her bat mitzvah project Crane produced, directed and served as MC for a talent show held on March 6, 2016 at Temple Israel to benefit the Friends of the IDF (FIDF). Crane says she chose to help the FIDF because "a couple of years ago Cathy Swerdlow's daughter came to TI's Meitin Religious School to speak about her time in Israel. Most of her time was spent in the IDF and I found it (her talk) very interesting." Crane says she chose to help the FIDF through a talent show "because I thought it would be a good way to get Temple Israel members and friends to participate as well as enjoy giving to charity."

The show was attended by about 50 people who donated a total of $700 to FIDF.

During the show, Natan Brener spoke about his experience serving in the IDF and how much the soldiers appreciate the FIDF, which provides several vital support programs to Israel's soldiers, sailors and airmen. These programs include scholarships, rest and relaxation, hospitality to lone soldiers, spiritual support and legacy programs for families of fallen soldiers. The FIDF Spirit Program provides special R&R for IDF combat soldiers who spend their days doing strenuous training and taking on the difficult task of protecting Israel at its many fronts. These men and women need time to rest, time to regain their strength and time to breathe. The SPIRIT Program affords these dedicated soldiers respite by providing a week of relaxation at one of several FIDF-sponsored resorts to rejuvenate their energies.

The FIDF Lone Soldier program supports Israel's soldiers whose families live abroad and who have chosen to leave their countries to serve the State of Israel. The Lone Soldiers Program provides financial, social and emotional support during this challenging time of their lives ensuring that soldiers know they are truly never alone.

The FIDF talent show comprised several acts including dancing, singing and playing instruments. Rachel Hart led off by dancing a beautiful interpretation of "Feed the Birds" from Mary Poppins. Lindsay Gassman played a piano rendition of "Speed of Sound" by Coldplay, and Ezra Sagotski played guitar and sang "From A Distance" by Julie Gold and two of his own compositions titled "Gonna' Make Some Money" and "Can You Hear Me Now." Ezra says of this last song, "I put myself in the position of an IDF soldier and this is what might be going through my mind. They get a bum rap from the media, you know, the media say they shoot at Palestinian children, when in truth, they drop flyers telling the women and children to bug out before the fighting starts. Also, I pictured myself as a soldier in a foxhole who was placing a call-not to a commander to come save me, but instead to the world to give some insight as to what I'm going through."

Bach, and a second piano piece called "Apologies," which she wrote. She was followed by Katie Williams who played spirited renditions of two of her own piano compositions.

The show ended with a skit titled "The Onion News," written by Noah Dukes, Aaron Markowitz, Rachel Crane, and Hannah Neely. It was performed by Markowitz, Dukes, and Crane.

Temple Israel is located at 50 S. Moss Road in Winter Springs and the entire community is cordially invited to attend any of its events.

For directions or more information about this event or future events please call the synagogue office at 407-647-3055 or visit us at http://www.tiflorida.org and click on the "Upcoming Events" button.