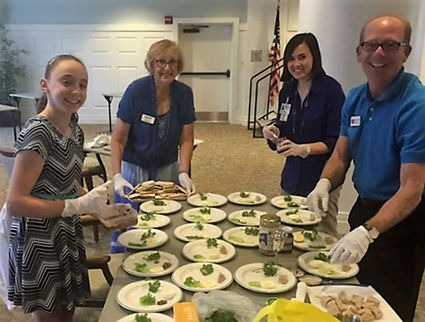 Passover can be a sad time for senior citizens in facilities where Jewish residents are in the minority and holidays such as Passover are not "on the schedule." Renee and Joe Aaronson at Westminster Towers Independent Living in Downtown Orlando were again planning their own private seder, but after a friend in the Towers asked them what Passover was all about, they went to Activities Director Sue Ambrosini for help. Ambrosini, in turn, called The Jewish Pavilion, and in short order had an abbreviated seder scheduled for 20.

The morning of the event, Ambrosini contacted JP Program Director Gloria Green to let her know that 39 had signed up for the seder! To accommodate this last minute doubling, 20 were seated at the seder table, the over-flow guests were seated as observers. While 19 knew there would be no place at the table, they were still interested in hearing the program. The Aaronsons, volunteers David Green and James Pasquineli, president of Home Care Assistance, and the Green's granddaughter, Amanda Jacobson, 13, helped get everything set up. Seven-item individual seder plates were placed at each setting with cups of wine and medicine cups of salt water. 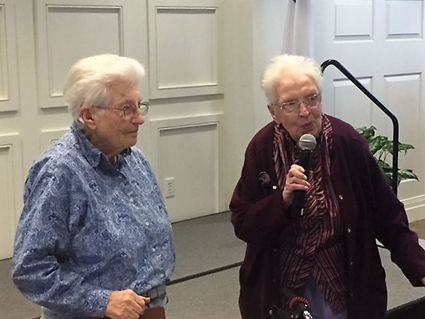 Renee Aaronson (l) and Betty Jean Patton, who had asked Renee 'What is Passover?'

Per the request of the Aaronsons, the seder began with an explanation of the two larger seder plates set out on the long table, and a detailed explanation of the 10 plagues. Amanda Jacobson asked the Four Questions in Hebrew, and at the end of the seder, sang Dayenu with the attendees joining in on the chorus. A question and answer session ensued, with questions expanding beyond Passover to include questions concerning Jewish practices such as keeping kosher, keeping the Sabbath, etc. Jacobson was able to help with some interesting tidbits on kosher food, and by explaining the bat mitzvah process. The Aaronsons' many friends at Westminster Towers now have a better understanding of "What it means to be Jewish."

You can make a difference in the life of a senior. For volunteering opportunities or to make a donation visit http://www.jewishpavilion.org or call 407-678-9363.