Building bridges in a divided world 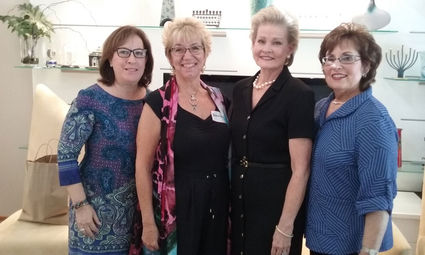 Grace means beauty or charm of form, movement, expression; a sense of what is right and proper, decency; thoughtfulness toward others; and it is the perfect description of Grace Nelson, wife of U.S. Senator Bill Nelson.

Recently, The ACCoRD Project invited her to speak at an afternoon tea hosted by Burt and Barbara Chasnov.

"Thank you, for heaven's sake, for what you are trying to do," Nelson said to the ACCoRD members, who hope to bring Americans back to civility, respect and dignity.

Truly a Southern steel magnolia (she hails from Jacksonville, which she called Southern Georgia), Nelson spoke eloquently and honestly about her life as a senator's wife, her travels to Africa, the atmosphere in Congress today as compared to when she and Bill first went to Washington, and Bill's experiences in outer space. As she talked, it was immediately realized by all in attendance that there were no labels, no partisanship-just people talking with people.

After sharing how she and Bill met, (it was 45 years ago, she was dating his best friend who invited her to come hear Bill as he was giving the keynote speech to a group of Key Club high school students. Shortly after that, they began dating and have been together ever since) Nelson spoke about the project that consumed her heart-helping the women of Rwanda. In 1985, Nelson, with a group of senator's wives, traveled to Africa during a long famine and drought. She met many starving women and children-many who had no chance to live-and realized these could have been her children.

"We are every little girl's mother," she stated. The women returned home with a strong desire to build bridges and help these people. In only a few weeks, they raised $200,000 through walkathons and bake sales. Then she received a check for $100,000 in the mail from an anonymous donor. With the $300,000, they were able to provide food and supplies for the people.

After sharing a bit of history about the genocidal mass slaughter of Tutsi and moderate Hutu in Rwanda by members of the Hutu majority government, she wondered, how could this have happened? Studying Rwanda's history, she listed three things that helped bring about this tragedy:

• The people thought of themselves as Hutu and Tutsi, not as Rwandans.

• The government's approach was divide and conquer.

• Hatred was tolerated, not realizing what it leads to.

Nelson could see a similarity between America and Rwanda. "We kill with words, not machetes. It is a toxic environment."

Congress wasn't always like it is today. When Sen. Nelson first went to Washington, Tip O'Neill was Speaker of the House. A gregarious fellow, O'Neill spoke his mind loudly and clearly, and no one was spared regardless of position. President Ronald Reagan wrote in his memoirs, they were friends "after 6 p.m." O'Neill in that same memoir when questioned by Reagan regarding a personal attack against the president that made the paper, explained "before 6 p.m. it's all politics."

Even though congressmen spoke their minds, there were still friendships among them all.

"Right relationships can solve our problems," Nelson said, noting that often it's a person's approach that causes division, hatred and disrespect.

Quoting Gandhi, Nelson encouraged the attendees to "be the change you want to see in the world."

When Bill was in space, Nelson said he was struck by the fact that as he looked at the Earth, he saw no borders. It wasn't like a map, where all the borders are drawn so that we can understand where each country is. However, there are no lines in the real world. "Could we ever think of ourselves without borders?" she asked.

Nice fluff piece, however, it should have been noted that her husband supported the Iran deal.