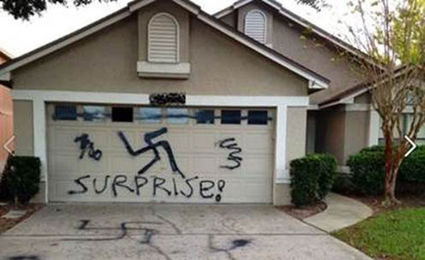 "The fact that anti-Semitic hatred still exists within our communities is not surprising, but it is still disheartening, and remains a constant reminder of how we must be vigilant in educating and speaking out in the face of hate," said Hava L. Holzhauer, ADL Florida regional director. "Anti-Semitism in Florida has shown many faces this past year-from assault, to harassment to vandalism and more."

Florida continues to be in the top four states reporting incidents of anti-Semitism, with New York, New Jersey, and California, reporting higher incidents. "This year's audit, most notably the increases in anti-Semitic vandalism and harassment, are painful reminders that anti-Semitism still poses a threat," noted Scott Notowitz, ADL Florida regional chairman. "The ADL's work fighting anti-Semitism will continue no matter how it manifests from one year to the next. We will persevere."

The annual ADL Audit comprises criminal and non-criminal incidents reported to the ADL Florida office and law enforcement, including incidents of vandalism, assault, and harassment targeting Jewish individuals and institutions.

Nationally, ADL's annual Audit of Anti-Semitic Incidents recorded a total of 941 incidents in the U.S. in 2015, an increase of approximately 3 percent from the 912 incidents recorded in 2014. Fifty-six incidents were assaults, the most violent anti-Semitic category, representing a more than 50 percent rise from the 36 assaults reported in 2014. Another troubling finding: anti-Semitic incidents at colleges and universities nearly doubled last year. A total of 90 incidents were reported on 60 college campuses in 2015, compared with 47 incidents on 43 campuses in 2014.

Three assaults occurred in Florida in 2015, up from a single assault in the previous year.

Boca Raton: A rabbinical student was walking when an assailant on a bike shouted at him that "Jews should go back to Auschwitz. Hitler was right." An altercation occurred between the two.

University of Florida: Three cars were vandalized with swastikas and F*$k.

The ADL Audit recorded 27 cases of anti-Semitic vandalism in 2015, 19 incidents in 2014. Vandalism incidents are individually evaluated by ADL and are categorized as anti-Semitic based on the presence of anti-Semitic symbols or language; the identity of the perpetrator(s), if known; and the target of the vandalism and its proximity to Jewish homes, communities and institutions.

The 2015 Audit includes in its totals swastikas and hate symbols that targeted Jewish property or communal institutions. Swastikas targeting other minorities or those used out of context simply for shock value were not counted.

The following is a list of selected instances of anti-Semitic vandalism in 2015:

Margate: During Sabbath morning services at a synagogue, nails were found under the tires of multiple vehicles.

Hollywood: Hateful messages were painted on the walls of a synagogue that was under construction, including perverted pictures, the words "(Expletive) the Jews" and "We're watching you."

Winter Park: A swastika and hateful messaging was spray-painted on a family's home.

Boca Raton: A was swastika painted on the ground in the student parking lot of a high school.

Boca Raton: A wall outside of an apartment complex was vandalized with graffiti including a Star of David, a plus sign, a heart, another plus sign, a swastika, an equal sign followed by several unidentified symbols.

Miami Beach: A family awoke to find F*%k Jews etched onto their car window, along with a swastika. Many of the family's relatives perished in the Holocaust.

Deland: The word Jew was written on front door and garage in what appears to be black marker. According to the victim, there was no ornamentation on the home indicating that she and her family are Jewish.

Incidents included verbal attacks and slurs against Jewish individuals (or individuals perceived to be Jewish); anti-Semitism conveyed in written or electronic communications, including anti-Semitic cyberbullying; and anti-Semitic speeches, picketing or events. Of particular note was the prevalence of the use of the swastika symbol in a significant number of harassment cases.

ADL has also seen a significant number of incidents in which the ability of Jewish members of homeowners associations or boards were questioned due to their religion.

The following is a list of selected instances of anti-Semitic harassment, threats, and events in 2015:

Delray Beach: Multiple employees at a Jewish organization received anti-Semitic and threatening phone calls from a caller over the span of a single day.

Miami Beach: Two individuals walked by a synagogue, and yelled "Allahu Akhbar!" (Arabic for Allah is great-it is both a religious term as well as one usurped by Islamic extremists) at an individual at the synagogue. One of the individuals then yelled that "heads will be cut off," and then stated directly to the synagogue attendee "I will cut your head off."

St. Petersburg: A couple were nominated for the positions of president and secretary of their condominium association, and won the positions in a Board election. An outgoing association leader was incensed at their election, since they allegedly owed dues, and in front of numerous individuals and association members said "I will get rid of the f?*cking Jews."

Highland Beach: After an online discussion negotiating the price of a project with a construction contractor, the apartment owner decided not to proceed. The owner then received several nasty messages from the contractor, one of which included the language "Up Yours Jew Bastard."

Port St. Lucie: When an individual was terminated from his employment due to work-related errors, he inquired about complaints he had made beforehand regarding his supervisor making anti-Semitic remarks to him in front of other employees.

Orlando: A news station received an email from an individual writing from out-of-state, identifying as a Muslim born in Palestine. In the email, the individual indicates that Jewish places of worship in the U.S. are 'the best places to attack first for Hamas in America.'

Boynton Beach: A restaurant manager, after a disagreement with a customer over the price of a special-listed food item, told an individual and his son that "You Jews are no longer welcomed here."

The Audit identifies both criminal and non-criminal acts of harassment and intimidation, including distribution of hate propaganda, threats and slurs.  Compiled using information provided by victims, law enforcement and community leaders and evaluated by ADL's professional staff, the Audit provides an annual snapshot of one specific aspect of a nationwide problem while identifying possible trends or changes in the types of activity reported. This information assists ADL in developing and enhancing its programs to counter and prevent the spread of anti-Semitism and other forms of bigotry.