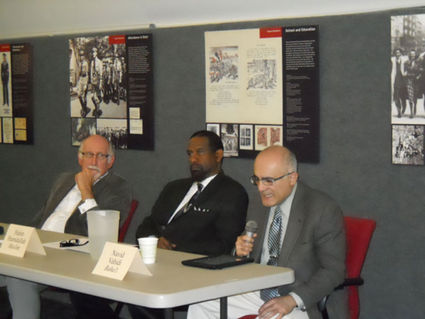 The Holocaust Center in Maitland will be hosting a four-part adult education series on different faith traditions represented in the Central Florida community. Scheduled for Wednesday afternoons in July, the focus of "Faith, Peace and Justice: A Summer Series" will be on ways that misunderstandings and misinformation have crept into interfaith conversations.

The series was created in a partnership with the Interfaith Council of Central Florida. It is the fourth year that they have collaborated on programming to explore different faith groups.

According to Jim Coffin, the executive director of the Interfaith Council, Americans take pride in the fact that we've invited diverse groups to come share our country. But sometimes, he says, we "have been less than welcoming to those who didn't subscribe to the religious viewpoint of the Protestant majority."

The Faith, Peace and Justice Series will take a serious look at a partial list of the mistakes made, but will also look at lessons learned and progress achieved. Coffin notes that the intended message is a positive one.

"It's our belief that if we as a nation adequately understand our past," he says," we'll be able to avoid repeating many of the mistakes."

The series will be held at the Holocaust Center, 851 North Maitland Avenue in Maitland. Each session will take a brief look at three faith groups that faced faith-engendered hardship ranging from marginalizing to discrimination to persecution. Each session will conclude with half an hour of questions from the audience. The sessions will be:

July 6: "Some of Those 'Other' Christians-How We've Treated Catholics, Mormons and Christian Scientists"

Sessions will begin at 2 p.m. and will last about 90 minutes. There is no cost to attend, and reservations are not required. For more information phone 407-628-0555.