Understanding the 'human evolution' of a Hamas terror leader's son 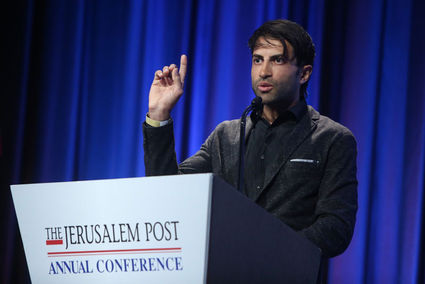 Mosab Hassan Yousef, the son of Hamas terrorist leader Sheikh Hassan Yousef and author of a 2011 New York Times bestseller memoir, recently re-emerged in news headlines when he spoke at the annual conference of the Jerusalem Post newspaper.

The so-called "Green Prince," Yousef is a Palestinian born in Ramallah and raised by one of Hamas's most dangerous leaders. The younger Yousef was arrested by Israel, but rather than becoming further hardened in prison, he became enlightened about the ruthless and shocking ways of the Palestinian terror group. Yousef became a spy for Israel and later defected from his whole community for a new life outside of Ramallah.

Yousef called his journey one of "human evolution."

"At some point, I thought the Jewish people were the enemies of humanity and the enemies of the Palestinian people," Yousef told a captivated audience during his Jerusalem Post conference speech. "That was until I experienced what the Jewish nation is, witnessed a real democratic model in an ocean of darkness."

Following Yousef's speech in May, three YouTube videos of his remarks have combined to garner more than 22,000 views.

Yousef challenged himself, his family-who disowned him-and, as he puts it, "the entire Muslim world...to transcend the conditioning of my society... I have seen death and came from hell, and it is very dark."

But what made this "Son of Hamas"-the title of his memoir-defect from the Palestinian terrorist culture? How does someone who was raised with privileges among the elite ranks of Hamas choose to leave?

Max Abrahms, an assistant professor of political science at Boston-based Northeastern University, where he researches and teaches on asymmetric conflict and international relations theory, said that a lot of terrorists eventually have "buyer's remorse" and "would like to return to their society." For fighters from various countries who get swept into Islamic State or other groups and travel abroad to train, he said many of them "want to return home and lead normal lives." They might get older and tired, and putting their lives at risk no longer seems palatable. Other times, once someone joins a terrorist group or rises within its ranks, he or she becomes disillusioned with the organization.

"They may see that what the organization is saying is untrue or that it is not as virtuous to its stated ideals as the person would like," Abrahms told JNS.org. "There might be disagreements over doctrine, disagreements over tactic. Sometimes there are personal disputes."

But Abrahms said that defecting from a terrorist network is not an easy task-personally, emotionally, or from a safety perspective. He said that when someone joins a terrorist organization, the group's members become like fraternity brothers or even relatives.

"They effectively cut themselves off from the rest of the world when they become terrorists... They become very insular," said Abrahms. "It would take a lot of inner strength [to leave the terror group]. The defector is seen as going against their loved ones."

Similar dynamics were at play for Israeli-Arab teenager Muhammad Zoabi, who had to go into hiding for several months during the summer of 2014-when Israel was at war with Hamas in Gaza-after publicly describing himself as a "proud Israeli-Arab Muslim Zionist" who opposes anti-Semitism as well as "Islamic and Arab extremism."

"I had to hide, go underground, keep a low profile, like what [I would do] if I had done a nasty crime," Zoabi wrote in a Facebook post soon after coming out of hiding.

More recently, Yedioth Ahronoth reported that senior Hamas member Bassam Mahmoud Baraka defected to Israel, turning himself and his family into Israel during the first week of June. He brought his laptop and secret maps that showed Hamas's cross-border attack tunnel infrastructure in the Gaza Strip, information that has benefited Israel's security forces.

To escape from Gaza, Baraka needed to lie to his extended family, saying he was going out to run errands and would return in the evening.

In his speech in May, Yousef admitted that on a personal level, he still has a loving father. But when his father puts on his "Hamas mask," said Yousef, "he is a monster, he is something else."

He continued, "The problem with that society is conditioning. You take anyone in Hamas on the side, as an individual, and they are just human beings. Any of us could have been brought up in that environment and been conditioned in the same way."

Yousef called on the world to take action against this radicalization.

"We see waves of violence and darkness taking over and we choose to stick our heads in the sand in the name of political correctness," he said. "The truth is, we are afraid and we are trying not to provoke them more. We are trying not to create a religious war. But there is a religious war whether you like it or not...The better way to face it is with courage... What is the alternative?