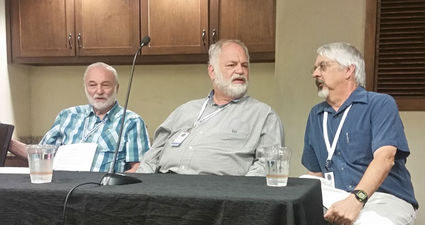 Shown here at the annual meeting of the Society of Crypto Judaic Studies are (l-r) Dr. Irwin M. Berg, scholar of the Lemba Jews of Zimbabwe; Rabbi Merrill Shapiro, president of the St. Augustine Jewish Historical Society; and Rick Hendricks, Ph.D., historian of the State of New Mexico.

As scholars of the Crypto-Jewish world, those who study Jews who went into hiding during the Spanish Inquisition and beyond, gathered for their twenty-sixth annual conference in Santa Fe, New Mexico, Rabbi Merrill Shapiro, president of the St. Augustine Jewish Historical Society presented the case for the presence of Crypto-Jews in the oldest U.S. European city during colonial times.

The Santa Fe Conference attracted participants from nearly a dozen countries and four continents seeking to share what they have learned to better understand Jewish communities forced from the mainstream of Jewish history by persecutions going back as many as 1800 years.  Keynote speakers included Richard Kagan, Ph.D., Arthur J. Lovejoy Professor of Early Modern European atJohns Hopkins University.  The Martin Sosin Memorial Address was delivered by Professor Enrique LaMadrid of the University of New Mexico's Spanish and Portuguese.

After hearing the evidence of an early Jewish presence on Florida's east coast, members of the Society for the Study of Crypto-Judaic Scholars added new evidence of their own. They noted that Antonio Martinez Carvajal, well-known as the chief Harbor Pilot in St. Augustine in 1577 and 1578 was surely Jewish as no record exists of "Old Christian/Catholic" Carvajals in the New World. Carvajal was likely part of the family of Luis de Carvajal who rose from a position as an accomplished naval navigator to become the governor and captain-general of New Spain, including portions of today's Mexico, U.S. Southwest and Central America. Carvajal was noted for his determination to develop Spanish ports and naval operations for military and commercial benefit. It was usual and customary, in such situations, to rely on family members.

Luis de Carvajal's sisters were tried by the Inquisition for engaging in Jewish pracetices in Mexico City and burned at the stake in an auto de fe. Carvajal himself was imprisoned by the Inquisition, also for practicing Judaism and died while incarcerated.

Were there earlier descendants of the Spanish Jewish community expelled in 1492 from Spain by the Inquisition in Colonial St. Augustine? The St. Augustine Jewish Historical Society continues its quest to identify them and bring them to light!

The Society for Crypto-Judaic Studies was created to establish a global organization for the benefit of those researching the history of Crypto-Jewish and Sephardic communities around the world.

Keep up the good work. America was built on a much stronger Jewish foundation than what's been recorded.