The third Jewish Temple is coming to your Facebook feed 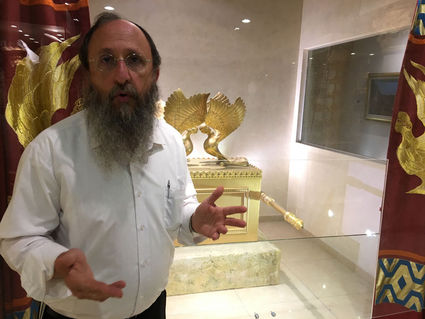 Andrew Tobin Rabbi Chaim Richman of the Temple Institute standing in front a replica of the ark of the covenant in his group's exhibition in the Old City of Jerusalem, Aug. 11, 2016.

The phrase encapsulates the group's controversial mission to rally Jews to reconstruct the Temple that was the heart of their religion until its destruction 2,000 years ago.

Over much of those two millennia, mourning the loss of the Temple and longing for its restoration has been central to Jewish thought and practice. As noted by the professionally produced video-a montage of Jewish wedding footage-the glass stomping that concludes a Jewish wedding is one such practice.

After a groom, played by an actor, does the deed, the glass miraculously reassembles to swelling music and text asks: "How many more glasses need to be broken?" Then the tagline appears.

The video-released this week ahead of the Jewish fast day of Tisha b'Av, which commemorates the Second Temple's destruction in 70 C.E. by the Romans-is part of the Temple Institute's strategy of using the new tools of the internet to bring its ancient message to the masses.

"Our goal is to raise the consciousness of the Jewish people and all humanity toward the central role that the Holy Temple plays in the life of mankind," Rabbi Chaim Richman, the Massachusetts-born co-founder and the international director of the Temple Institute, told JTA. "We're very much focused on getting the message out on all the channels of social media and all the things people are into today. Most of my work is internet related."

Established in 1987, 20 years after Israel conquered the Temple Mount and the Palestinian territories in the Six-Day War, the Temple Institute was one of the first groups to openly advocate the rebuilding of the two temples that once stood on the plaza. Another co-founder is Rabbi Yisrael Ariel, who was among the paratroopers who took the Temple Mount from Jordanian forces in 1967.

The problem for supporters is that the Temple Mount in the Old City of Jerusalem is sacred not only to Jews but to Muslims and Christians, too. The site includes the Dome of the Rock and the Al-Aqsa mosque, two of the most significant shrines in Islam. Israel chose to leave it under Muslim control in 1967, and Jewish prayer is prohibited there.

Ever since, even rumors of changes to the "status quo"-let alone provocative calls to build a third Temple in their place-have drawn international Muslim ire and Palestinian violence. Tensions surrounding the Temple Mount played a major role in the first and second Palestinian intifadas, or uprisings, and helped trigger the most recent wave of attacks that started in October.

Some Israelis have always opposed the government's decision not to reclaim the mount. In the 1980s, the Jewish Underground, a Jewish settler terrorist group, plotted to bomb the Dome of the Rock, in part to catalyze the construction of the third Temple in its place. The Shin Bet security agency thwarted the plot.

Richman, who often quotes the great Jewish rationalist Maimonides, said the Temple Institute opposes violence, and works "within the confines of the human condition, halachah and the political reality." Halachah is the Hebrew word for Jewish law.

The Temple Institute focuses on preparing the objects and skills needed for the sacrifice of animals and the esoteric rituals that were carried out by kohanim, or priests, in front of crowds of Jewish pilgrims before the last temple's destruction. All of its work is led by a rabbinical council and based on meticulous analysis of Jewish scripture and academic research.

The group also works to build support for its mission and itself, which is where the internet comes in. After his cable television show that aired in Texas was canceled in 2006, Richman found an audience for his Temple-centric scriptural exegesis online.

Most content is in English to maximize reach, including to the many evangelical Christians who support the group, many through tax-exempt charities in the United States. For many evangelicals, the construction of a third Temple fulfills a prophecy about the second coming of Jesus.

For the past three years, the Temple Institute has launched an Indiegogo crowdfunding campaign ahead of Tisha b'Av, making headlines in the Jewish press. This year's campaign is for a school to train the priests to staff the third Temple. Combined, the campaigns-which run the two months until Rosh Hashanah, the Jewish New Year-have raised less than $150,000. That is a fraction of what the group's assistant director, Yitzchak Reuven, said is an average annual operating budget of around $1.1 million. But fundraising isn't the primary purpose of the campaigns.

"We really work on a shoestring budget, so crowdfunding is important for us," Yitzchak Reuven, the Temple Institute's multimedia director, told JTA. "But the main goal is to be part of the dialogue and get people involved. We're not rehashing something that is 2,000 years old. We're articulating it in a way that people can see that it's contemporary, and just being on social media is part of the message."

Also around Tisha b'Av, The Temple Institute has for the past four years released videos seeking to reframe the day as a time to take action, not mourn the past.

"How is anything going to change if we don't do anything about it? Our thing is to mourn and cry," said Richman. "God gave us the Temple Mount on a silver platter. It would be more honest to say, You know what? I'm not interested.

The Temple Institute's aggressive outreach has helped make it something of an institution in Israel. An exhibition of the group's preparations for the Temple moved in 2013 from a small side street in the Old City to a larger space just outside the Western Wall plaza. Hundreds of thousands of tourists visit each year. The guided audio tour, available in nine languages, culminates with the parting of ornate curtains to reveal a life-size replica of the ark of the covenant.

Nearby, overlooking the Western Wall and the Temple Mount, is a man-sized gold-plated menorah the group built for use in the Temple. It was moved to that prominent location in 2007 in a ceremony attended by then-Ashkenazi Chief Rabbi Yona Metzger.

The Israeli government provides some funding to the Temple Institute-though not reliably or significantly, according to its directors-as it does educational and research institutions, and allows women to do their national service as tour guides at its exhibition. One woman is working there now, and three are slated to start next year.

The Temple Institute's growth has coincided with increased mainstream support for Jewish access to the Temple Mount. A large minority of Israelis now oppose the restriction on Jewish prayer on the Temple Mount, according to polls. And leading religious figures, Knesset members and ministers have called for rebuilding the Temple, including Agriculture Minster Uri Ariel of the right-wing nationalist Jewish Home party, who was filmed last year praying on the Temple Mount.

According to Yair Sheleg, a researcher on religion and state at the Israeli Democracy Institute think tank, the Temple Institute has benefited more than it has contributed to the growth of the Temple Mount movement.

"It's surely one of the most important organizations, but the climate doesn't come because of actions of organizations, the climate comes because of much more general social reasons," he told JTA. "The social climate came because many religious Zionists think during the last decade that secular Zionism has failed, and that only religious motivation can maintain the national spirit against Muslim religious motivations."

Even for many religious Jews, actively seeking the rebuilding of a third Temple is not just politically provocative but spiritually suspect.

"The rabbinic model developed after the destruction of the Second Temple is the one that has set the tone for Jews, regardless of denomination, for 2,000 years," Marcie Lenk, a research fellow at the Shalom Hartman Institute in Jerusalem, wrote in 2014. "The rabbis were responsible for creating the system of Judaism that would survive and thrive without a Temple, though they insisted that the Temple and its destruction should be remembered and commemorated."

Yuval Cherlow, a prominent moderate religious Zionist rabbi, said that while preparing to rebuild the Temple is a good thing, the first step is "re-creating society and yourself."

"The prophets constantly emphasized that the pillars of the Temple are a society that is full of justice, charity and humanity, and without pride," he told JTA. "I really believe that if the temple will be rebuilt in this situation, without those pillars, it will be destroyed again."