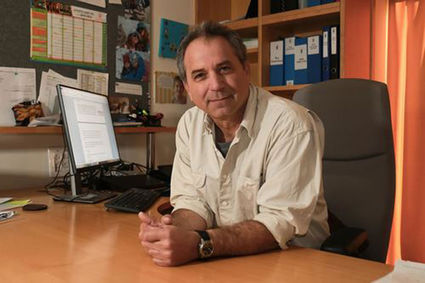 Prof. Noam Weisbrod, director of the Zuckerberg Institute for Water Research (ZIWR) in the Jacob Blaustein Institute for Desert Research at Ben-Gurion University of the Negev.

Israeli water experts believe by 2050, almost half of the world's population will live in countries with a chronic water shortage.

What's causing the shortfall is population growth, which leads to a greater demand for food, increased pollution and climate instability, according to Prof. Noam Weisbrod, director of the Zuckerberg Institute for Water Research (ZIWR) in the Jacob Blaustein Institute for Desert Research at Ben-Gurion University of the Negev.

In Israel's Negev Desert, which has long been plagued with water challenges, a team of 80 scientists and 250 graduate students are working on ways to tackle the problem using cutting-edge science in partnership with academics around the world. ZIWR has become the go-to consultant on water emergencies in Colorado and California, and provides long-term assistance around the world including places like Mongolia and Central Asia.

Weisbrod explained that "not everything can be about novel research," it's also about educating a new generation of water experts and scientists, teaching them about the "moral obligation" to leverage a progressive education to help those less fortunate than themselves.

Currently one billion people are living in developing countries facing problems that cannot be solved in the lab. "There is a very bad correlation between water [challenges] and hunger, disease and poverty," Weisbrod said.

Seven years ago, he established a yearlong course called "Rural Water Development" to further educate students working on graduate degrees about such world problems. In the past few years, Weisbrod has brought student groups to villages in rural areas of Ethiopia, Zambia and Uganda. In each locale, the students work with locals and a cadre of NGOs to identify their water sources and test the water quality. They also teach children about hygiene issues and educate people about the aquifer's proper hygienic use. Projects range from drilling wells with local materials to building storage tanks that collect rainwater and installing bio-sand filters to reduce contamination.

"The students research the water challenges of wherever they will be traveling and determine the low-tech solutions they will implement when they get there," Weisbrod said. Then, they spend 10 days "getting their hands dirty" experiencing the "Rural Water Development" course, the only such course of its kind in Israel.

In Ethiopia, the students drilled boreholes to provide drinking water and installed low-tech water pumps. In Zambia, the students analyzed the water quality and installed filters to improve it, including in HIV clinics and at schools. In Uganda, they built a rain catchment system near school bathrooms, allowing children to wash their hands after going to the toilet.

Roi Ram, a second year master's student in the hydrology department, traveled to Uganda in 2015. He said the trip opened his eyes to the "gaps between the situation in those countries and the Western world," which he called unbelievable.

While Feedback from students and non-governmental organizations (NGOs) about his course has been positive, Weisbrod said he understands that no matter how good the class project is "in two weeks, we won't change Africa." The exposure the students receive does have a long-term impact on them as they move into careers in areas including academia, consulting, and government. One student, for example, has established a startup that provided cellular phones for improved communication in Zimbabwe.

Of late, ZIWR has been working on fusing its cutting-edge science with low-tech technologies.

"We are now, just recently checking an option for a project in South Africa where will take water from old mines to develop hydroponics and fish farms," Weisbrod shared. ZIWR is also researching solar panels that can be installed in rural areas for a reasonable price. Other projects have involved decreasing clogging as a result of waste and treating wastewater.

Professor Emeritus Pedro Berliner is another member of the Blaustein team. He has spent the last 25 years working on projects of various capacities for third world countries. He estimates that the university spends as much as a few million dollars per year on these projects, and leverages at least 50 percent of its team of scientists and students.

"The point here is that desertification-the process by which fertile land becomes desert, typically as a result of drought, deforestation or inappropriate agricultural techniques- is a real problem in third world countries," Berliner explained.

In African dry land areas, it's not a water shortage problem but an inability to capture water for food and other uses. Taking a technology developed for use in the Negev, Berliner's team established specially prepared plots of land (known as runoff agroforestry), growing trees and crops between them. This technique helps trap flood water, thus allowing for the production of more food. The twigs and stems of the trees can also be used for firewood.

Covering the area between the rows with plastic mulch and using a trickle irrigation system decreases water loss by up to 40 percent.

Berliner believes the projects are not only Israel's "moral obligation to help others who are not in as privileged position as we are and are in dire need of these techniques to survive," but there are also political considerations. Desertification is one of the leading causes of African migration, including to Israel.

"By helping people in these areas," he said, "we are helping avoid massive migration."