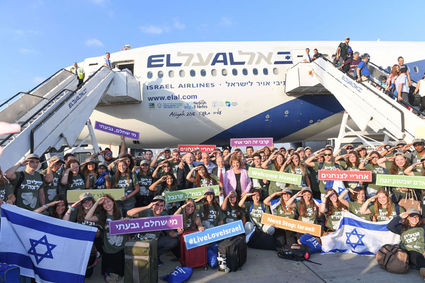 The soon-to-be IDF soldiers getting off the plane at Ben Gurion Airport.

TEL AVIV-A group of 233 Olim (new immigrants) landed in Tel Aviv on an El Al Boeing 777 chartered by Nefesh B'Nefesh to begin their new lives in Israel, including 75 Lone Soldiers who will become Israeli citizens and volunteer in the Israel Defense Forces (IDF). Two of the Lone Soldiers are locals-Roni Weil, daughter of Aaron and Sharon Weil of Maitland, and Ben Brent, son of Rene Brent of Lake Mary and David Brent of Israel. The flight was facilitated in cooperation with Israel's Ministry of Aliyah & Immigrant Absorption, the Jewish Agency for Israel, Keren Kayemeth Le'Israel, JNF-USA and Tzofim-Garin Tzabar.

On this flight, Nefesh B'Nefesh celebrated the Aliyah of its 50,000th newcomer through the organization, which was founded in 2002. Twenty-two year old Rebecca Glanzer from Brooklyn, N.Y., graduated recently from Columbia University with a degree in economics and is hoping to serve in the IDF's Artillery Brigade. "I have been looking forward to making Aliyah and serving as a Lone Soldier in the IDF for so many years, and it is so crazy to me that this dream I had in high school is finally being realized," said Glanzer. "What drew me to Israel was the community and sense of belonging that you cannot find anywhere else in the world. Being the 50,000th person to make Aliyah with Nefesh B'Nefesh only affirms for me that I am part of something bigger, joining the thousands of people who took the opportunity to live a more meaningful and more Jewish life in Israel. I can't believe it's finally happening!"

Of the 75 soon-to-be soldiers, over half are young women. The flight's additional passengers include a diverse mix of people from 22 U.S. states and one Canadian province, including 24 families, 78 children and 10 medical professionals. The ages of the immigrants range from 3.5 weeks to 85 years old.

"This is such an honor for me to join you at this special moment. The moment you have all come home. You are no longer Jews in exile, you are now all Israelis. Each of you, young and old, men and women, have fulfilled the dream of 2000 years, you have made Aliyah," said President of Israel Reuven Rivlin at the ceremony. "I know the decision to make Aliyah is not easy, leaving behind family and friends, looking for work, starting in new schools, learning a new language. There are challenges ahead but we are all here to support you and help you build your new home."

"The State of Israel salutes the young people who chose to leave their comfortable lives in North America in order to make the greatest contribution to the country's national security and its people," said Minister of Aliyah and Immigrant Absorption Sofa Landver. "I congratulate them and the other Olim who make Aliyah as a result of the cooperation between the Ministry and our partner in Aliyah, Nefesh B'Nefesh. I'm confident, and I promise, that the Ministry of Aliyah and Immigrant Absorption will accompany these Olim and take care of them throughout their entire integration process."

"Every single family and individual we bring to Israel who decides to make Aliyah is such a special thing for us as an organization, but when you see so many brave young men and women from North America sacrifice so much and voluntarily leave their families because they feel a yearning desire to serve in the IDF and defend Israel, that's powerful," said Rabbi Yehoshua Fass, founder and executive director of Nefesh B'Nefesh. "Looking back in 2002 when Tony Gelbart and I founded this organization, we couldn't have imagined bringing 50,000 Jews from North America to Israel to fulfill their dreams and the dreams of the Jewish people. And we're not stopping anytime soon."

"We are proud of our partnership with Nefesh B'Nefesh, and every new planeload of North American Olim strengthens and enriches our country. The immigrants arriving from the United States and Canada are coming not out of distress but rather out of excitement to take part in the greatest national project of the Jewish people, said Chairman of the Jewish Agency for Israel, Natan Sharansky. We must ensure that the State of Israel remains a place in which every Jew feels at home, a place that ignites Jews' imagination and strengthens their identity and security. I would particularly like to welcome the dozens of young people who are choosing to build their lives in Israel: your success is our success, and your future is our future. Welcome home!" 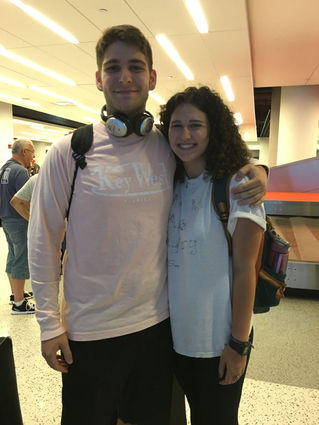 "The touching stories of the participants are inspiring and encourage us to continue to give them the warm hug that they deserve, these young adults from all over the world come to Israel to serve in the IDF as Lone Soldiers," said Gary Vitkin, CEO of Tzofim Tzabar Olami. "One of the most meaningful accomplishments of "Tzofim- Garin Tzabar" that is in collaboration with The Jewish Agency, Ministry of Aliyah and Immigrant Absorption, the Kibbutz Movement and Nefesh B'Nefesh is the unique dynamic that is formed by the teens is made possible by these organizations and I am happy to see that this success is translated to building a future in Israel".

These Lone Soldiers continue to be an important element of defense for Israel. The Lone Soldiers on this flight will join the over 900 Lone Soldiers from the U.S., and the 3,000 Lone Soldiers from around the world who are currently serving in the IDF. Nefesh B'Nefesh, in cooperation with Friends of the IDF (FIDF), cares for thousands of them through the Lone Soldiers Program, which offers support for all Lone Soldier immigrants during each stage of their service: pre-immigration, pre-recruitment, during active military service, after release from the army, and during adjustment to civilian life.