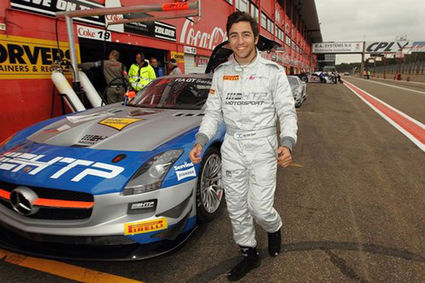 Alon Day next to his Mercedes race car.

As a young boy growing up in Ashdod, Israel, Alon Day got his first go-kart at age 9. By 15, he was racing them.

Less than a decade later, Day has become the first Israeli professional race car driver on the NASCAR circuit. He made history by competing in NASCAR's Xfinity Series race at the Mid-Ohio Sports Car Course on Aug. 13.

"Driving a race car is not like any other sport," Day toldJNS.org. "You are actually almost flying on the ground which is great. And the adrenaline is something I cannot describe in words. You have to be in the race car to really understand what I'm talking about."

Day, 24, lives in Tel Aviv but is spending a lot of time in the United States, making a splash by proudly carrying the banner of being the first Israeli in a uniquely American sport.

"It's a big honor to be the first Israeli in American NASCAR," he said. "I raced in European NASCAR for two years but being here for the main events, it's big. I'm fortunate to be the one."

As for the risks that come with competitive high-speed racing-sometimes in treacherously wet conditions, as was the case with the Ohio race where he finished in an admirable 13th place-Day takes it in stride.

"When you ask someone why do you jump out of an airplane with a parachute, that's obviously not less dangerous than driving a race car," he said. "The adrenaline you can get out of it is impossible to get at any other sport."

While Israel is not known for motor sports, Israelis can watch European NASCAR races on television.

"NASCAR has been doing some good things in the past few years going over to Europe and trying to get motor sports into different cultures," he said. "It's getting bigger and people are starting to learn more about it. I hope in the future it will have the same popularity as basketball and soccer in Israel."

Day was one of 11 participants selected for NASCAR Next program. He previously competed in six races in 2012 in the Indy Lights Series. He's also in a highly-charged championship contest in NASCAR's European circuit, the Whelen Euro Series.

"We are really happy and proud for Alon," said Jerome Galpin, NASCAR Whelen Euro Series President and CEO. "He is a talented driver and a great guy. This is the American dream, where everything is possible."

Day made his NASCAR debut driving car No. 40 on an especially rainy day in Ohio. Despite the slick conditions on the track, he spent a considerable amount of time in the top 10 throughout the race. "My expectation wasn't that high," Day said. "If I would finish like 25th, I'd be super happy. To find myself fighting for the lead, that's not bad."

Day also felt like he had an advantage over the American drivers who were not used to competing in wet weather. "In Europe, we do everything in the rain. I knew when the rain would come I would be strong. I was able to show my driving ability and surprised everybody."

After the race, he received congratulations from a childhood hero, race runner-up Sam Hornish Jr.

The adrenaline junkie wanted to compete in the U.S. because of its large Jewish community, where's he's hoping to find funding and sponsors to further his NASCAR dreams. "We're trying to find sponsorships so I can race in five more races this year," he said. "I'm trying to get better and contend for the 2017 Rookie of the Year."