We're all from the same planet 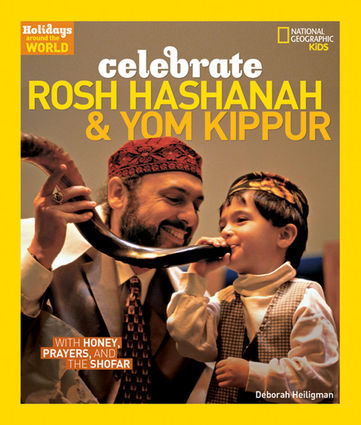 Can a children's book about the Jewish High Holidays help advance world peace?

"Celebrate Rosh Hashanah and Yom Kippur"-first published in 2007 and reissued this year with a new cover-is one of the volumes included in National Geographic's series, "Holidays Around the World," which introduces children to the ways in which religious and cultural holidays are celebrated in various countries. Other holidays spotlighted in the series include Thanksgiving, Diwali, Easter, and Ramadan, as well as the Jewish holidays Hanukkah and Passover.

Deborah Heiligman, the author of "Celebrate Rosh Hashanah and Yom Kippur," has written 30 books for children and teens. She sees the "Holidays Around the World" series as a step toward fostering greater interfaith understanding.

"You may have a non-Jewish kid, a Christian kid, or a Muslim kid looking at the pictures in this book, and some of the people in the pictures look like they do," Heiligman tells JNS.org. "And they're going to be playing a game that they play or eating a food that they eat, or even if they're not, they look similar, they look like kids." That is the moment, she says, "when they go 'aha,' even though we have differences we're all from the same planet.' I think the way you can make change in the world is to start with children."

"Celebrate Rosh Hashanah and Yom Kippur" introduces young readers to the blowing of the shofar, holiday greeting cards, prayers, and special foods. The book also examines how the Jewish High Holidays are celebrated worldwide. Through striking photographs, readers see how Jews from California to Zimbabwe, and from Mexico to Jerusalem, participate in the holiday rituals.

"We sit down with our families for a delicious holiday dinner. We eat a special bread called challah," Heiligman writes. "On Rosh Hashanah our challah is round to show that life is a circle from birth to death to birth again." Pomegranates are another important holiday food. "Some of us eat pomegranates because it is said that a pomegranate has 613 seeds," Heiligman notes. "There are 613 commandments, or things we must do, in the Torah, our holy book."

The shofar, a central symbol of the High Holidays, "is made from the horn of a ram," Heiligman explains. "The shofar is difficult to blow, and the people who blow it at Rosh Hashanah and Yom Kippur services are very much appreciated and honored." Three different notes are blown, she points out: "an unbroken sound, called 'teki'ah;' a wailing sound broken into three parts called 'shva'rim;' and a kind of tooting sound broken into nine parts, called 'tru'ah.'" The sound of the shofar "is like an alarm clock, or a wake-up call. It says, 'Really wake up now, think about your life, think about the past year, pray well, pay attention!'"

A two-page photo spread in "Celebrate Rosh Hashanah and Yom Kippur" shows thousands of Jews gathered at a lake in Uman, Ukraine, for the Tashlikh service. "On the first day of Rosh Hashanah, in the afternoon, we have a special service to cast away our sins," Heiligman writes. "It is called Tashlikh, which means to send away. We try to go to a river, or another body of water. We turn our pockets inside out, as if emptying out all our sins. Or we throw pieces of bread into the water-the pieces of bread represent our sins."

Heiligman. who was raised in a Jewish family in Allentown, Pa., agreed to write 10 volumes in the National Geographic series because she thought the books could be a way for children to become leaders who understand that diversity is part of our culture, and that every culture deserves respect.

"The High Holidays are a time for reflection, a time for new beginnings, a time to look inward and ask yourself how can I be a better person, how can I be the best person that I can be," Heiligman tells JNS.org. "I think children can relate to this. Jews pray in hopes of becoming better people and I hope adults can relate to that, too. Rosh Hashanah and Yom Kippur give us a time to do that, to really sit and think."

Each of the volumes in the series is written with input from a consultant. Rabbi Shira Stern, director of the Center for Pastoral Care and Counseling in Marlboro, N.J., was an adviser for "Celebrate Rosh Hashanah and Yom Kippur."

Stern's introduction places the High Holidays into wider historical and cultural context for parents and teachers. Referring to Elul, the Hebrew month of preparation preceding Rosh Hashana, Stern notes, "'Elul' is an acrostic for the Hebrew phrase, 'Ani L'dodi, V'dodi Li,' which means 'I am my beloved's and my beloved is mine.' This is a metaphor for our relationship with God. But it's not a romantic relationship; it's a bond between parent and child." Especially for young children, Stern writes, "God 'the parent' is a natural concept. We want to feel so close to God that God will forgive us for the wrongs we have done. To inspire ourselves, we mark each day by blowing the shofar and include special prayers that begin the repenting process."

"We have come full circle in the Jewish year," Stern concludes. "And we are spiritually ready to begin again."