Does the U.S.-Israel military aid deal put to rest years of strained relations under Obama? 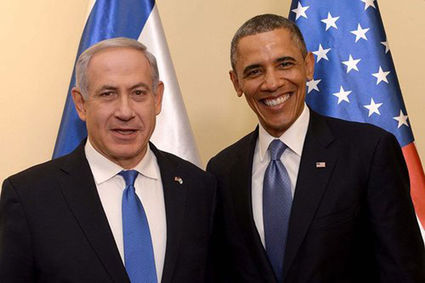 The United States and Israel made history on Thursday signing the largest ever military assistance package between the two allies. The agreement was hailed by many as a means to ensure the Jewish state will securely meet the challenges of a dangerous and unstable Middle East over the next decade.

However, after years of seemingly strained relations between Israeli Prime Minister Benjamin Netanyahu and U.S. President Barack Obama, does the deal sweep aside this history as Obama's term in office comes to an end?

"I think it is a message of deterrence to Israel's enemies in the Middle East," David Makovsky, a former U.S. senior advisor on Israeli-Palestinian negotiations told JNS.org. "Whatever U.S.-Israel policies differences there have been over the past several years, there now is a rock solid long term commitment to Israel's security. There's no adversary in the Middle East that has a commitment in advance of $38 billion dollars in support."

The new ten-year security deal, known as the Memorandum of Understanding (MOU), which

According to the White House, the agreement "will permit Israel to update the lion's share of its fighter aircraft fleet -  including through the acquisition of additional F-35s-increase its missile defense, and acquire other defense capabilities needed to meet its threat environment."

"This unprecedented agreement will ensure Israel maintains a strategic military edge over the next decade, which is the largest military aid package ever given to any other nation," he said.

Netanyahu added the "agreement will help Israel continue to build its armed forces and continue to improve our anti-missile defense systems...which of course are a very important achievement for Israel."

Hailed as a victory

Conference of Presidents of Major Jewish Organizations Executive Vice Chairman and CEO Malcolm Hoenlein said the agreement "sends an important message to the entire region of the Middle East of the enduring strength of the U.S.- Israel special relationship."

"It underscores to those who have tried to portray a fraying in the fabric of the relationship that the two countries have the strongest security and intelligence cooperation and an enduring commitment to mutual support," he said.

"Strategic cooperation between the U.S. and Israel has long been a critical component of the U.S.-Israel relationship built solidly on shared interests and values," AJC CEO David Harris said. "The vital assistance provided by the MOU will reinforce that bilateral cooperation, and assure Israel's qualitative military edge against very clear threats to both Israel and the U.S. in the most volatile region of the world."

While the deal was widely praised by Israeli and American leaders, it also includes a number of notable changes from the existing military aid agreement that may fuel questions over the deal.

Previously, Israel obtained additional funding for its missile defense program on an ad hoc basis from Congress. Under the new agreement, this funding, roughly $5 billion, will be included in the agreement and committed towards missile defense assistance, therefore eliminating Israeli lobbying with Congress.

"The supplement on missile defense says that Israel can only seek more funding during 'significant conflict.' How that is defined could be a sticking point in the future," Jonathan Schanzer, vice president of research at the Foundation for the Defense of Democracies, told JNS.org.

"This part likely means the relationship between Israel and Congress is going to change. Not necessarily for the worse, but it will be less about transaction and more about policy and targeting Israelis enemies than talking about what Israel needs," Schanzer said.

Additionally the agreement also maintains Israel qualitative military edge (QME) over its adversaries in the Middle East. However, as a result of the Iran nuclear deal last year, the United States has been providing increased military assistance to other Middle East allies, such as Saudi Arabia, which the Pentagon recently announced a $1.15 billion deal to provide the Sunni Arab country with more than 130 tanks, 20 armored recovery vehicles and other equipment.

Schanzer believes this may cause a future conflict for the U.S. and Israel concerning the QME.

"When you look at how Israel's adversaries are buying weapons hand over fist from the U.S., this becomes a potential challenge for Israel moving forward."

The agreement between the U.S. and Israel comes after nearly 10 months of laborious negotiations that underscored the tense relationship between Obama and Netanyahu over the past several years. Both leaders had a range of disputes, most famously on the Iran nuclear deal as well as over peace negotiations with the Palestinians and Israeli construction in the disputed territories.

This strained relationship was compounded by reports over the last several months that indicated Netanyahu could wait for the outcome of the upcoming U.S. presidential election before signing the deal, and deny Obama the opportunity to preside over an agreement of this magnitude. Ultimately, however, Netanyahu signed the deal.

Makovsky believes it was important for Netanyahu to enter the agreement with Obama to bolster the bipartisan consensus on Israel.

"For Netanyahu, this was important to have this is done under Obama's signature," said Makovsky, who serves as distinguished fellow and director of the Project on Middle East Peace Process at the Washington Institute for Near East Policy. "People question bipartisanship when it comes to the U.S.-Israel relationship and here you have a liberal democrat president who's signing off on ten more years of military support for Israel."

For Obama, Makvosky contends, signing the deal was an opportunity to thwart criticism of his stance towards Israel before leaving office early next year.

"For him it was very important as well," Makovsky said. "In his eyes, there is a wall between policy disagreements and support for hardware for Israel. He views this agreement as that he followed through on that distinction."

"They [the Obama administration] take a lot of pride on their levels of security assistance and from their perspective, they see this as a validation of that distinction that [Obama] has drawn."

However, Schanzer doesn't believe this is the final chapter in Obama's legacy on Israel and there are possible punitive measures that Obama may yet embrace, especially in regards to Israeli settlements, before his term ends early next year.

"The common view at the State Department is that all options are on the table," Schanzer said. "This may mean a U.N. Security Council resolution or even sanctions against entities in the U.S. that support settlements. There are a range of actions that can be taken for the president to show a balance. This is not the president's legacy full stop."