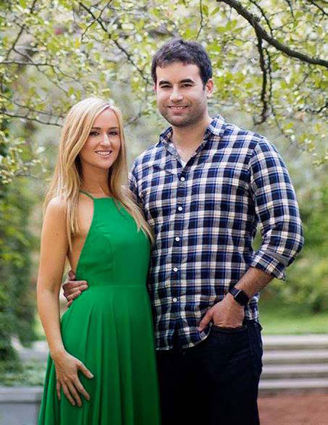 Daniel and Sherry Williams of Longwood, Fla., are pleased to announce the engagement of their daughter Lindsay Williams to Dr. Adam Siegel, son of Dr. Robert and Michele Siegel of Greenville, S.C.

The bride-elect is a writer, video producer, recovering travel addict, and proud graduate of the University of Florida (chomp, chomp!). She is a dedicated storyteller, who once lived in a van in the Australian Outback because she thought it would give her writing "street cred" (it didn't). Lindsay currently works as a content producer for a creative agency based in Miami, Fla.

The groom-elect is the comedic heir apparent to Larry David and a vision in white (coat). He earned his degrees from Washington University in St. Louis, Mo., and Rosalind Franklin University of Medicine & Science in Chicago, Ill., and completed his residency program at Westside Regional Medical Center in Plantation, Fla. Adam currently works as a podiatric surgeon at a private practice in downtown Chicago.

The couple met through friends while living in Miami and now reside in Chicago. Brought together through a mutual interest in keeping Seinfeld quotes relevant, the pair also share a love of Blue Apron, Horatian satire, and long walks by the lake with their dog, Bovie. Most important, they intend to teach their children to be dutiful students of the Torah because, hey, if they had to go to Hebrew school, their kids have to go too!

The wedding will be held April 8, 2017, at Mission Inn Club & Resort in Howey-In-The-Hills, Fla., followed by a honeymoon in Kauai, Hawaii. The Williamses and Siegels look forward to celebrating the joyous union with all of their family and friends.