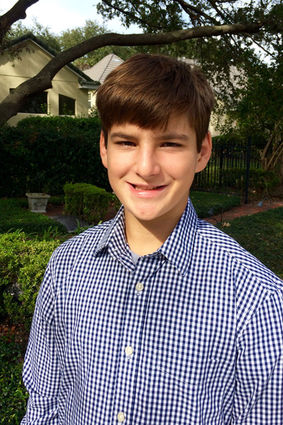 Benjamin Joseph Perreault, son of Dale and Phil Perreault of Maitland, will be called to the Torah as a bar mitzvah on Dec. 10, 2016, at Congregation of Reform Judaism.

Ben is in the seventh grade at Lake Highland Preparatory School where he is on the President's List, which is the highest academic honor; and is on the Middle School baseball team.

His hobbies and interests include baseball, video games, his dog Teddy, and hanging with friends.

Benjamin shares this day with Yosef Kaminetzki, z"l, a 6-year-old Polish boy who died in the Holocaust before he was able to reach the age of 13. Ben also shares his bar mitzvah month, December, with the following members of his family: his grandfather Larry, Uncle Bruce, Uncle Louis, cousin Andres, cousin Frank and brother Daniel.

Sharing in the family's simcha will be Ben's brother, Daniel; sister, Sydney; grandparents, Dand and Judy Perreault and Larry and Sheila Palcula; aunts and uncles from Virginia, Florida and Baltimore, Md.; and relatives and friends from Missouri, Maine, Nevada, California and Maryland.