One Ruth Gruber says goodbye to another 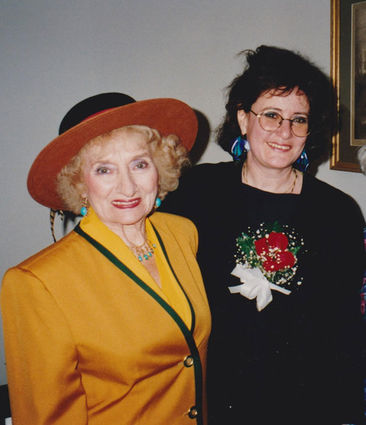 (JTA)-When you share a name with someone you respect and admire, you always try to live up to the connection, because sometimes outsiders aren't aware of the difference.

That's how it was for decades with me and Ruth Gruber, the noted photojournalist, reporter and author who died last week at age 105 after a remarkable life and career.

From my first international byline, when I was a young intern at the Associated Press in Rome in the 1970s (when Ruth was already in her 60s), right up to a Facebook comment just a couple months ago, our names, and also our shared focus on Jewish affairs, have led to confusion.

It didn't matter that she was decades older than I was, or that she had written largely about Israel and Holocaust matters and I mainly write about European Jewish affairs and Jewish heritage. Our biographies have often been conflated, and articles even ran with the picture of the wrong person.

Ruth received checks in the mail that were actually due to me, and a major Jewish organization once sent me an official letter announcing an award-except as I read through the letter I realized that the award was meant for her, not me.

I tried to underscore my individuality by using my middle initial or middle name-Ellen-in my byline and in other professional dealings. But it hasn't always helped.

In January 1983, when, as a UPI correspondent, I was arrested on trumped-up accusations of espionage, jailed overnight and expelled from communist Poland, Ruth's answering machine ran out of space because of calls from anxious friends and family.

I frankly can't remember now if we met when I returned to the U.S. briefly after my expulsion from Poland, or if our first meeting came nearly a decade later, in 1992, when, wearing a striking broad-brimmed hat, she attended the launch of my first book, "Jewish Heritage Travel: A Guide to Central and Eastern Europe."

But we stayed in touch over the years, and every time we got together or spoke on the phone we laughed about our common-if sometimes frustrating-problem of confused identity.

Over the decades, I have received scores of emails meant for Ruth, especially before she herself had an email account.

A particular flood of them came after a two-part CBS mini-series based on Ruth's book, "Haven: The Dramatic Story of 1,000 World War II Refugees and How They Came to America," aired in February 2001.

Scores of viewers who were moved by the story of how Ruth in 1944 escorted 982 refugees from 19 Nazi-occupied countries to safe haven in Oswego, New York poured out their hearts in sometimes very emotional terms.

Even five years later a non-Jewish viewer in Colorado wrote to Ruth at my email address: "Shalom!!" he began. "There are no words to express how your story has impacted our lives! [...] Do you have any suggestions as to how we might embrace and love the Jewish population where we live? With all the hatred that has been afflicted on your beautiful people and culture there are so many obstacles to overcome. Any advice you could give would be priceless!!"

Perhaps the funniest example of our identity mix-up took place in person, not in cyberspace.

At an American Jewish Committee annual meeting in the late 1990s, I gave my name when I asked a question during one of the sessions. As I went back to my seat, a woman stopped me.

I stared at her for a few seconds before I could gather myself to respond.

Farewell, Ruth! I hope I can continue to honor your example.