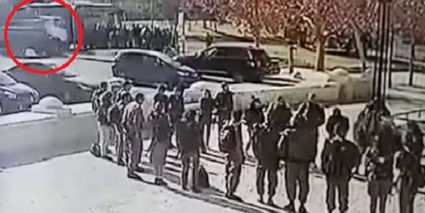 A screenshot of a security camera footage capturing the moment before a truck-ramming terror attack in Jerusalem Sunday, which killed four Israeli soldiers.

(JNS.org)-A truck-ramming attack that killed four Israeli soldiers in their early 20s and injured at least 16 people at a Jerusalem bus stop Sunday was likely carried out by a supporter of the Islamic State terror group, Israeli Prime Minister Benjamin Netanyahu said.

"We know the identity of the attacker, and according to all the signs he is a supporter of Islamic State," Netanyahu said while visiting the scene of the attack, adding that the terrorist act was similar to truck-rammings in Europe such as in Nice and Berlin during the past year.

A large truck, captured on security camera footage, is seen plowing into a group of Israeli soldiers who had exited a bus in Jerusalem's Armon Hanatziv neighborhood, then reversing direction and running the bodies over again. Killed in the attack were four Israeli soldiers: Yael Yekutiel, 20, Shir Hajaj 22, Shira Tzur, 20, and Erez Orbach, 20. The terrorist, who was shot dead at the scene, was later identified as Fadi al-Qanbar from the eastern Jerusalem neighborhood of Jabel Mukaber, which borders the Armon Hanatziv neighborhood where the attack took place.

"We will overcome this terror, just as we overcame other attacks," Netanyahu said. "There are a number of actions that we will not specify at this time, which we will have to take to ensure that incidents such as these do not recur."

A spokesman from the Palestinian terror group Hamas quickly praised Sunday's car-ramming attack, saying Hamas "welcomes the brave and heroic operation in Jerusalem" and calling the attack a "natural reaction to the Israeli crimes and violations against our people, land and holy sites."