These gals put the '8 Over 80' event together 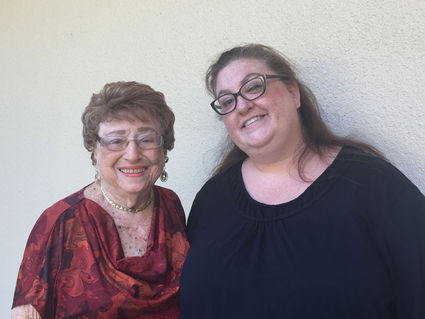 The 8 Over 80 Honorary Dinner on March 5, sponsored by Kinneret Council on Aging, is to be a lovely affair, with eight octogenarians showing the community what it is to create a legacy of activism, philanthropy, and leadership.

The details involved in such an event are monumental. The Kinneret committee consisted of Leslie Collin, executive administrator of Kinneret Council on Aging; Phyllis Kamenoff; Carol Feuerman; Faye Novick; Mollie Savage; Jacob Hara; Arlene van de Rijn and Geanne Share. They have helped with everything for the 2017 Event.

Phyllis Kamenoff and Mollie Savage served as co-chairwomen for the event. Savage truly has "sand in her shoes," being born and raised here in Central Florida. It was through her uncles, Ernest and Joe Lefkowitz, that Savage first learned about the Kinneret Council on Aging and the fine work it does in the community. Anything needed at Kinneret-whether it is visiting a residence or helping in other ways, she is there.

Savage has been doing volunteer work since 2009. She joined Temple Israel where her family has been members for many years. Savage is now a member of the Sisterhood Board and also a member of the most recent Bornstein Leadership Group.

Kamenoff first came to Orlando in 1944 during World War II as mistress of ceremonies and to sing at the Flamingo Supper Club. She also performed here at a Jewish War Veterans' dance. Her chauffeur was a man named Abe Kamenoff. Almost immediately they fell in love and were married, and made Orlando their home.

In 1954, Kamenoff joined Temple Israel, and she has served in almost every capacity in Sisterhood and the Temple. She was a choir member for many years, and also served as flower chairwoman for more than 10 years. She has worked on the Calendar Book, and the catered Kiddush luncheons every Shabbat.

Abe and Phyllis Kamenoff were founding members of the Jewish Community Center. Phyllis is also proud of being a Life Member of Hadassah, and a supporter of the Holocaust Center, Kinneret, Jewish Family Services, the Jewish Pavilion, and the Historic Society of Central Florida. Throughout the years, Kamenoff has served on the boards of numerous local and civic organizations. Even today in her 90s, she continues to work in her Temple and the community. She is in charge of Temple Israel Sisterhood Kitchen Hostesses each week, and she helps to oversee the High Holiday Flower Fund, and the High Holiday Break-fast.

Kamenoff is the proud mother of her three children, grandmother to six grandchildren and one great-grandson.

Where could you find two more dynamic and creative people, who are highly motivated and bring out the best in people around them as Mollie Savage and Phyllis Kamenoff?