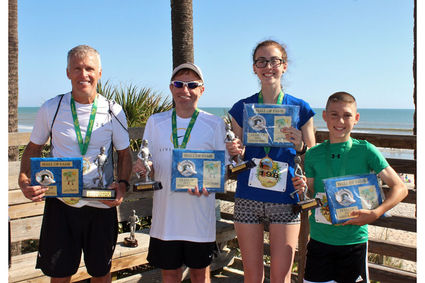 A few weeks ago The Heritage ran a story about Central Florida residents Jules and Elyse Baclar, who are marathon runners. Now in their late 60s and early 70s, they are still running strong.

Asher Ravede is on his way to following in their running shoes. On April 1, he was inducted into the Daytona Running Series Hall of Fame (HOF) at the Rayz Awareness 5K event. What makes this an extremely special event is that Ravede, son of James and Lisa Ravede of Ormond Beach and grandson of Joan Ravede of Orange City, is only 12 years old, making him the youngest person to be inducted into the Daytona Running Series HOF.

In order to qualify for induction, a runner must place first or second in the series for five years. Ravede won in his age division every year since he started running with his dad at the age of five at the local YMCA. According to the Running Series' rules, runners must also enter a minimum of five of the 10 races each season to be eligible for post-season awards. Ravede has completed 130 5Ks and four triathlon races, and won three 5K overall titles (That's more than 10 races a season).

When he was a 10-year-old Tomoka Elementary student, he earned-and still holds-the fastest time (20:49) for the Strong, Brave and Healthy 5K annual event.

"He has a passion for running, and this has been a goal of his since he found out about it when he was 8 years old," James Ravede told the Ormond Beach Observer the day before Asher was inducted. "My wife and I are so proud of Asher and his ability to set a goal at such a young age and see it to its fruition."

The Ravedes did not want to push their son into racing, and followed the advice of an Embry-Riddle Aeronautical University summer camp coach, who told them not to "train" him, but to let him run the 5Ks when he wanted to. The coach warned that training at such a young age would cause burn out for young Asher.

At his induction ceremony, Ravede received an honorary plaque and distinctive collared shirt with logo-not to mention the distinction of being the youngest runner to ever be inducted into the Daytona Running Series HOF.

What is next on Ravede's agenda? He is preparing for his bar mitzvah at Congregation B'nai Torah in June.