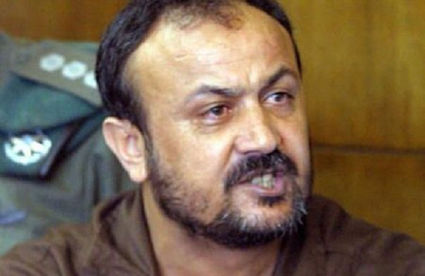 A day after convicted Palestinian terrorist Marwan Barghouti wrote a New York Times op-ed that omitted his crimes and terrorist organization membership and sparked scathing rebuke from the international community, the newspaper added a brief editor's note acknowledging the murder and terror-related convictions that led to his imprisonment.

The April 16 piece-where the Times referred to Barghouti as a "Palestinian leader and parliamentarian"-was slammed by Israeli officials and Jewish leaders in the U.S. and elsewhere.

Prime Minister Benjamin Netanyahu said Tuesday, "I read, on Sunday, the article in The New York Times that presents arch-terrorist Marwan Barghouti as a 'parliamentarian and leader.' The paper recanted after we pointed it out to them."

"Calling Barghouti a 'political leader' is like calling Assad a 'pediatrician,' Netanyahu added. "They are murderers and terrorists."

Barghouti, who used the Times as a platform to accuse Israel of conducting "mass arbitrary arrests and ill-treatment of Palestinian prisoners," was convicted in June 2004 for killing five people-including the death of a Christian Greek Orthodox priest that he mistook for a Jewish rabbi-and the attempted murder of another. He is currently serving five life sentences and 40 additional years for the murders.

The editor's note clarifies, "This article explained the writer's prison sentence but neglected to provide sufficient context by stating the offense of which he was convicted. They were five counts of murder and membership in a terrorist organization."

The Times's public editor, Liz Spayd, criticized the paper's op-ed department for its failure to list the crimes committed by Barghouti,writing that "failing to do so risks the credibility of the author and the Op-Ed pages."

The op-ed was also criticized across the political spectrum in Israel.

Yesh Atid chairman MK Yair Lapid criticized the article stating Barghouti "was involved in dozens of terror attacks that made people lose family, that maimed innocents, that ruined people's lives. The New York Times 'forgot' to tell its readers that."

Bayit Yehudi chairman Naftali Bennett weighed in via Facebook, posting a picture of one of the terrorist's victims and writing, "Marwan Barghouti is a heinous murderer who should rot in jail until the day he dies."

The prisoners are demanding improved conditions such as the installation of pay phones in all prison wings, as well as allowing more frequent family visits.

A spokesperson for the Israel Prison Service told JNS.org, "Hunger strikes in prison endanger the health and life of the prisoners in custody of the state who's in charge of their well-being and are violations of the discipline and order. Organized hunger strikes even more so."

Prison officials have started "disciplinary measures towards the striking prisoners and transferring them into separate cell blocks," the spokesman said. These strikes are not new to Israeli prisons and officials do not negotiate with prisoners. Security officials are prepared for the possibility of a strike and coordinate with other organizations such as the IDF, the Ministry of Health and police.

In response to the hunger strike, Barghouti has been moved to solitary confinement. Officials are investigating whether Barghouti's op-ed was transmitted to the newspaper through his attorney or if Barghouti's wife penned the article.

While Barghouti is affiliated with Fatah, the largest faction of the PLO headed by Palestinian Authority President Mahmoud Abbas, his hunger strike caused other Palestinian factions to unite behind his effort.

"The Palestinian people declared today an intifada on behalf of the prisoners who are conducting a campaign whose foundation is a hunger strike for their rights and their dignity," the statement said.

At the same time, Barghouti's actions may also undermine and threaten Abbas. Despite being imprisoned for over a decade, Barghouti remains a popular figure among Palestinians and is rumored to be a successor to Abbas. As such, Abbas sought to capitalize on the latest efforts, releasing a statement in support of the hunger strike and called on the international community to intervene.

Abu Obeida, a spokesman for the Gaza-based Palestinian terror group, Hamas, said Monday that the release of the Palestinian prisoners is a top priority for the organization.

Protests in support of the hunger strike were held in several Palestinian areas throughout Judea and Samaria, most prominently in Ramallah, which saw over 2,000 protestors march through the streets waving Palestinian flags and holding pictures of Marwan Barghouti.

Another Joint List Knesset member, Aida Touma-Suliman, applied for a permit to visit Barghouti in prison.