'It's a new day for Israel at the UN,' US Ambassador Nikki Haley tells World Jewish Congress plenary assembly 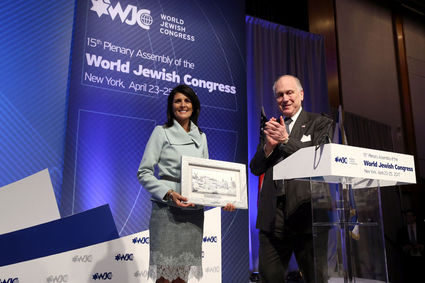 US Ambassador to the UN Nikki Haley and WJC President Ronald Lauder at the WJC Plenary Assembly in New York. 25 April 2017. (c)

NEW YORK-United States Ambassador Nikki Haley spoke before the World Jewish Congress' Plenary Assembly in New York on Tuesday, telling the 600 delegates from more than 90 countries, "I can safely say that it's a new day for Israel at the United Nations. I know it's a new day for Israel at the U.S. Mission to the United Nations. The United States will no longer be silent as Israel is unfairly attacked at the United Nations. Silence is not my thing anyway, but that's especially true when it comes to standing up for America's friends. And we have no better friend in the Middle East than Israel," Haley said.

"The anti-Israel bias that has existed for so long at the UN is cut from the same cloth as the BDS movement and the global rise in anti-Semitism. They all seek to delegitimize Israel. They are all efforts to intimidate her friends and embolden her enemies.

"The facts are this: Israel has the right to exist in peace and security.  Israel is America's best friend in the Middle East. Israel and America both seek peace. Anti-Semitism must be ended in all of its forms in every place on the planet."

Haley extended warm praise to WJC President Ronald S. Lauder. "I want all of you to know that you could not have a better leader as your President than Ambassador Ronald Lauder. I have met with Ambassador Lauder in my office at the UN, and I've found his counsel very wise and very helpful. I can assure you that his viewpoints are widely respected at the highest levels of the American government, as well as around the world."