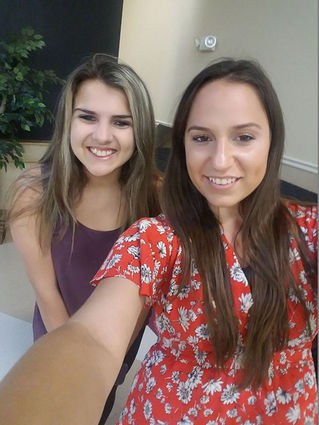 On April 6, more than 100 students, their parents and Orlando residents attended the first "Answering Difficult Questions About Israel" workshop at The Roth Family Jewish Community Center in Maitland, Fla. It was organized by Spark Orlando and the Jewish Federation of Greater Orlando. Representing StandWithUs were Ron Krudo and Rayna Rose Exelbierd, who presented the program.

Israel is so often a topic of conversation these days that it is no surprise that pro-Israel people are challenged regularly on their support for it. For close to two hours, they educated attendees on how to identify tough questions, methods for critical thinking and provided facts to answer some of the common questions raised about Israel.

As the son of two Israelis, Krudo's love for Israel is grounded in his family's history, but this love isn't enough to share the story of Israel. He encountered StandWithUs at Florida State University and it provided him the education and tools he needed to tell Israel's story with the facts to back it up. Upon graduating, Krudo took the position of Executive Director of Campus Affairs.

Rayna Rose Exelbierd, 25,had a similar experience at Florida Atlantic University with faculty administration reluctant to respond to anti-Israel actions by Students for Justice in Palestine. "StandWithUs supported my efforts, I became an Emerson Fellow and upon graduation am now the Southeast High School Coordinator," she said.

"The Land of Israel and the central role its plays in Judaism is constantly on the minds of Jews across the globe. SWU, expertly represented by their two well-spoken ambassadors Ron and Rayna, did a great job of presenting the facts and helping us enage those who attack Israel with a productive, well-reasoned approach," said Sarah Gittleson of Spark Orlando.

One amazing student leader, Sami Kuperberg, recently dealt with an anti-Semitic/anti-Israel incident at Oviedo High School. Exelbierd saw Kuperberg's Facebook post go viral (see photo) and reached out. Nine-year old Parker Cohen volunteered to read it out loud. Silence... and then shock when Exelbierd asked the audience, "Does this high school look familiar? Does this seem like it could be written by your neighbor or someone you carpool with? What if I told you it was written by a teen in this room?"

Everyone searched the room and Kuperberg was asked to stand up. The audience cheered. She shared her story, empowering the group to stand up and be proud of their love for Israel.

Kuperberg exclaimed, "It was an incredible program that taught me, and everyone in the room how to respond effectively to the hate we may receive. I have been using the skills and methods that I learned in my daily life, not just to stop students from being anti-Semitic, but to educate them at the same time."

Kuperberg's actions energized the room and there was no trouble finding volunteers-including Tracey Kagan and her daughter Sophie Cohen-to participate in a technique that demonstrates how to properly respond to anti-Israel comments.

StandWithUs was founded in 2001 after the second Intifada and soon realized the need for a college program that selects and trains student leaders on how to educate about Israel. Five years ago, it realized that education needed to start earlier and formed the High School Internship. There is now a program for middle schools.

Krudo and Exelbierd are excited that the High School Internship has been successful in Orlando. In attendance was alumni Dor Lotringer's family. Lotringer graduated from Lake Brantley High School. He attends USF on a full-ride scholarship he earned from a StandWithUs program he organized called the "15 Second Challenge." Similar to the Ice Bucket, he challenged teens to make a video completing a task in less than 15 seconds. The goal is to raise awareness about Tzeva Adom-how much can you accomplish in the 15 seconds it takes to find shelter from an incoming bomb? 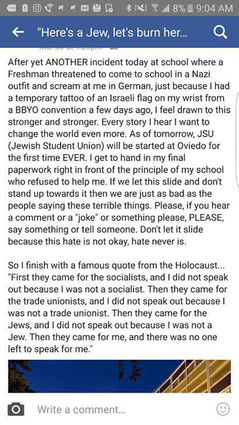 Olga Yorish, Jewish Federation of Orlando executive director wrote to Krudo and Exelbeird: "I've heard much about StandWithUs but have never seen the organization in action. I was very impressed with Ron Krudo and Rayna Exelbierd who made difficult concepts easy to understand and relate to and with their ability to engage with the audience, especially with teenagers. It was an excellent program. I look forward to working with them again in the future."

StandWithUs is honored to work with the Orlando community.

"We believe that education is the pathway to peace and look forward to many more productive events," said Krudo.

For more information about the The High School Internship and college Emerson Fellowship program, please contact: raynae@standwithus.com and www.standwithus.com/emerson.