By Jane Edelstein
The Jewish Pavilion 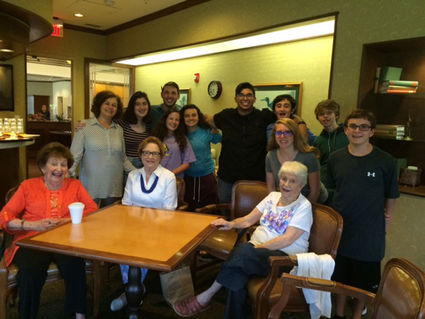 "Bank notes even have Braille on them for the sight-impaired"... and 68 other things to love about Israel, were discussed at a recent discussion between Ohev Shalom teens and mature adults at Village on the Green. The love-fest for Israel was in celebration of Israel's 69th birthday.

"When I was so young, I didn't recognize the significance of Israel's becoming a state." So said one of the mature adults at Village On The Green senior community in Longwood, speaking of her memories of Israel's birth as a nation in 1948.

"Getting news, especially from other countries, was very different back then," noted another senior, pointing out that she was barely 20 years old at the time. "I kind of vaguely remember hearing about Israel's new statehood once, but really don't remember much else."

Indeed, with today's 24-hour news cycle, and the sheer number of media that deliver constant news, it's hard to imagine that news of Israel becoming a state could be just a flicker of a memory. Yet, the mature adults and the Congregation Ohev Shalom teens who shared the discussion of Israel's becoming a state, seemed to understand the "then-and-now" differences.

"Israel today is an entirely different place than it was even a few years ago," noted Lily Brenner, who spent a portion of a year living in Israel. "So much of what Israel achieves has impact everywhere in the world."

There are so many wonderful discoveries and inventions that can be attributed to Israel that the class focused on those, as a way of celebrating its 69th birthday. Can just one class really cover 69 reasons to love Israel?

Indeed, this one did. Here are just a few of the newsworthy attributes Israel can claim:

• Israeli bank notes have Braille on them for the sight-impaired.

• Israel is the only country that revived an ancient, unspoken tongue-Hebrew-to be its national language.

• More than 90 percent of Israeli homes use solar power to heat their water.

• Security measures at Ben Gurion Airport (most of them unseen) are the best in the world.

• An Israeli start-up invented a nontouch, radiation-free device called Babysense, that prevents crib death by monitoring a baby's breathing and movement during sleep.

• Many popular American TV shows were based on Israeli programs, including "Homeland," "In Treatment" and "Rising Star."

• The popular mobile mapping program Waze was developed in Israel. Google bought the GPS-based navigation app in 2013 for a reported $1.3 billion.