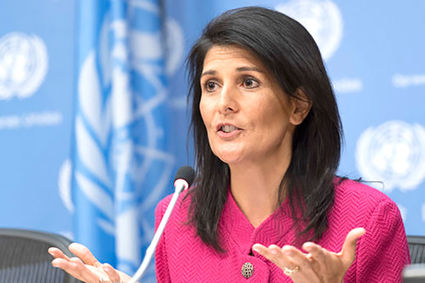 (JNS.org) U.S. Ambassador to the United Nations Nikki Haley slammed the U.N. Security Council Thursday for its inaction on Iran, which she says has "repeatedly and deliberately violated" sanctions.

"The Security Council has failed to even take minimal steps to respond to these violations," Haley told a council briefing on Iran. "We must show Iran that we will not tolerate their egregious flaunting of U.N. resolutions."

"As in the case of the ballistic missile launches by Iran in March 2016, there was no consensus in the Security Council on how this particular launch related to Resolution 2231," said Feltman.

Haley, however, said Iran has clearly violated Resolution 2231, which calls for the Islamic Republic to refrain from activity related to nuclear-capable missiles.

China and Russia, which hold veto power in the Security Council, are unlikely to agree to more punitive measures against Iran.